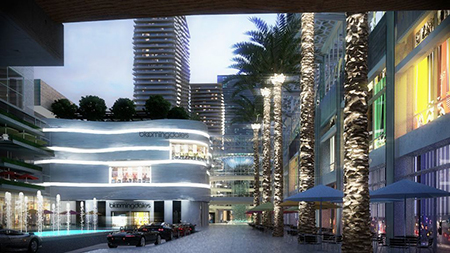 The Forbes Co. and Taubman Centers are teaming up to build their third premier shopping destination in Florida — The Mall at Miami Worldcenter — expected to open in 2016. The two Michigan companies are partners in two other high-end shopping centers in Florida — the Mall at Millennia in Orlando and The Shops at Pelican Bay in Naples.

“The (750,000-square-foot mall) will be the premier retail experience in an area of south Florida that has a large base of existing visitors and residents and is poised for significant future growth,” says Nathan Forbes, managing partner of The Forbes Co., which is based in Southfield and owns Somerset Collection in Troy. “In addition to Macy’s and Bloomingdale’s, Miami Worldcenter is attracting strong interest from some of the finest brands in the industry.”

Spanning more than 25 acres at the northern end of the central business district, Miami Worldcenter will be one of the largest urban developments in the United States. It will feature a mix of retail, residential, office, hospitality, and entertainment components, and will include the Marriott Marquis World Convention Center Hotel, which will feature approximately 1,800 rooms and 600,000 square feet of convention space. The Mall at Miami is expected to break ground in late 2014.

“We’ve always believed in our site’s potential — especially as a retail destination — and are confident the Forbes/Taubman team is the right one to execute this vision,” says Nitin Motwani, managing principal at Miami Worldcenter Associates.

Headquartered in Bloomfield Hills, Taubman Centers is currently working on six other projects, including The Mall at University Town Center in Sarasota, Fla.; The Mall of San Juan in San Juan, Puerto Rico; International Market Place in Waikiki, Honolulu, Hawaii, and shopping malls in Xi’an and Zhengzhou, China and Hanam, South Korea.