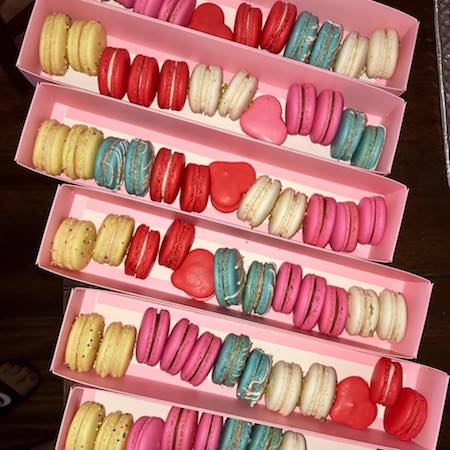 After baking cakes and other desserts out of her home full-time for several years, founder and owner Manal Hussein has opened For The Love of Sugar at The Scott in Detroit’s Brush Park neighborhood. The mixed-use development features 1,500-square feet of first-floor retail and restaurant space.

“I went to school at Wayne State University for marketing management and had a hard time finding a full-time job after I graduated, so I did some stuff on the side, including selling cakes. I ended up getting a job, but I eventually quit to pursue it full-time at home,” says Hussein.

“After a while it still became overwhelming, so I decided to open up my own shop. I had some knowledge of where the city was going before everything took off and I knew I wanted to be a part of the expansion in Detroit.”

When it comes to the bakery, Hussein likes to experiment with “unconventional flavors,” including fruity pebbles, Nutella, Ferrero Rocher, and tiramisu. She also applies this approach to her macarons, with flavors inspired by canoli, tiramisu, and other desserts.

In the coming months, For the Love of Sugar will be accepting custom orders for weddings, birthdays, and other events, and cakes are currently being sold whole or by the slice. There are also vegan and gluten free recipes.

The bakery also features house-made coffee drinks, including cake-flavored and floral-inspired lattes. Early risers can also enjoy coffee and fresh-baked muffins and scones daily, with gluten-free oatmeal bowls in the works for the future.

“There are so many more people that I can serve and introduce my flavors to this way,” she says. “I wasn’t able to open up my house to a ton of people, but now we’re able to switch up flavors weekly. The downtown area doesn’t just have to be a one-stop destination, there’s so much to do and I think we’ll complement Detroit; you don’t have to just come down and get dinner, you can stop here and grab a dessert and walk around when the weather is nice.”

Richard Broder, CEO of Broder and Sachse Real Estate, The Scott’s developer, says For The Love of Sugar will be a welcome addition in the development and downtown.

“We’re looking for tenants that are unique, home-grown, special, and will improve the community and provide things they need or can benefit from,” he says. “The opportunity to have cake, coffee, and baked goods in a neighborhood that is growing in population, not just at The Scott, but throughout Brush Park, we thought that could be a draw. When she brought in macarons to her interview, that pretty much sealed the deal.”

The Scott is located at 72 Erskine St., and For the Love of Sugar is open daily from 7 a.m. to 8 p.m., with extended hours on Friday and Saturday.