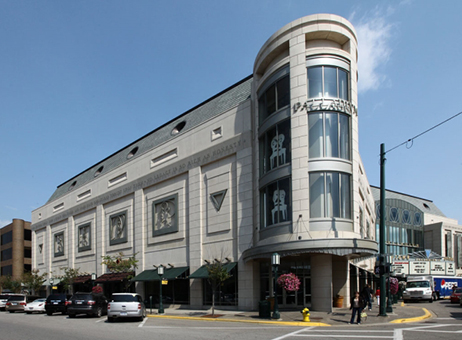 Uptown Palladium 12, a $40-million entertainment center that opened in downtown Birmingham in 2001, is up for sale. The project, which offers 12 movie screens and 51,700 square feet of commercial space, has struggled the last two years to refill a handful of vacant retail and restaurant locations.

“Some of the retail spaces are below ground, and when you don’t have street frontage, it makes things more difficult in terms of drawing in shoppers or restaurant goers,” says Jim Bieri, principal of Stokas Bieri Real Estate, a commercial brokerage firm in downtown Detroit.

“It’s a little easier to get the first tenants there, but once you look to re-lease the space, it becomes more difficult. For the near and long term, it’s a viable retail destination with parking nearby, and overall downtown Birmingham has been doing well. Someone with patience and capital will make it work.”

Owned by Stephen M. Ross, founder and chairman of Related Retail in New York, and co-developed with the late Jim Weiner, president of Related Retail Corp. in Birmingham, the project opened to much fanfare, including a Tower Records store, Buca di Beppo, Pampas Brazilian Grille, and Quattro Cucina Italiana. Located at North Old Woodward and Hamilton, the site was formerly occupied by a Crowley’s department store.

Over time, the original tenants were replaced with Arhaus Furniture (since moved to Somerset Collection South), along with several bars and restaurants, including City Cellar, Blue Martini, Barrio Tacos and Tequila, Hamilton Room, and Chen Chow Brasserie.

Ross, who has donated more than $400 million to the University of Michigan in Ann Arbor, including major gifts to the Stephen M. Ross School of Business and the expansion of Michigan Stadium, could not be reached for comment. The brokerage team handling the sale includes Mid-America Real Estate Michigan Inc. in West Bloomfield Township and the Farbman Group in Southfield.

Currently, Olympia Entertainment, an affiliate of Ilitch Holdings Inc., operates the movie screens at the Palladium. The company also operates the Birmingham 8, at South Old Woodward near Merrill Street, and the RenCen 4 in downtown Detroit.

An asking price was not listed with the Palladium sale. The overall complex offers 126,200 square feet of space and had an assessed value of $10.2 million with annual taxes of $426,600.

In related news, the Birmingham City Commission last week approved the transfer of a liquor license to Denise Ilitch and Zaid Elia, the new owners of 220 Merrill and Edison’s, located along Merrill, between South Old Woodward and Pierce. In addition, Paul Jenkins Jr., owner of What Crepe? announced he was closing the restaurant on North Old Woodward near the Palladium as well as a location on Washington Street in downtown Royal Oak.