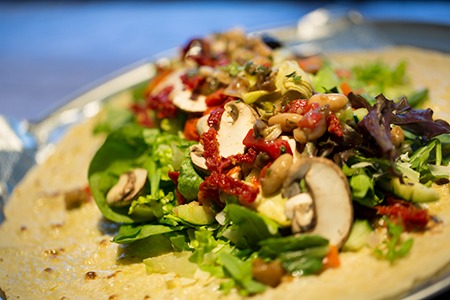 Two restaurants are opening in metro Detroit this week: The Grille Midtown in Detroit and Michigan’s first Piada location in Troy.

Opening tonight is The Grille Midtown, on Woodward between Warren and Mack, part of the Woodward Garden Block Development that includes the renovated Garden Theater and several apartment units. With a seating capacity of 88, the restaurant provides an upbeat, intimate experience, says Stephanie Byrd, a spokeswoman for the business. “You can come in before or after a show at the theater. It (offers) a complete entertainment experience.”

Artwork adorning the restaurant’s wall consists mostly of vintage automobile grills. “We wanted to connect somehow to the city’s roots,” Byrd says. “Everyone here is connected to the auto industry, so we started there.”

Items on the menu include contemporary American dishes, such as dill-stuffed Peppadew peppers, crab cakes, lamb chops, and grilled salmon. Entrees range in price from $17 to $30.

The restaurant — owned by the same family behind Flood’s Bar and Grille on St. Antoine in downtown Detroit — plans to open for lunch in January, Byrd says.

On Friday, Piada will open in Troy, although customers are invited to start lining up as early as 6 p.m. tonight as the first 100 in line will each receive vouchers for free piadas (a wrap-like sandwich) for a year. “This will be our eighth time offering this promotion,” says Chris Doody, CEO, founder, and chairman of Piada. “We just held this promotion in Rocky River (Ohio) last week and had our first 100 guests by 3 a.m.”

The fast, casual eatery, at 2038 W. Big Beaver Rd., west of Crooks Road, is one of 18 locations that serve Italian street food, including piadas pasta bowls and chopped salads. Food is prepared along an assembly line in a manner similar to Qdoba or Subway.

Doody says Piada will be opening a second location in Shelby Township in early 2014 and is looking for additional sites. The company chose Troy as its first site since it’s “a well-established area with appealing demographics. Many restaurants have had success in this market, and we hope to do the same,” Doody says.

In other foodie news, Executive Chef James Rigato of The Root Restaurant and Bar in White Lake will prepare a Thanksgiving dinner — based on the menu featured in the November issue of Hour Detroit — at Ford Field during the Lion’s Thanksgiving game.