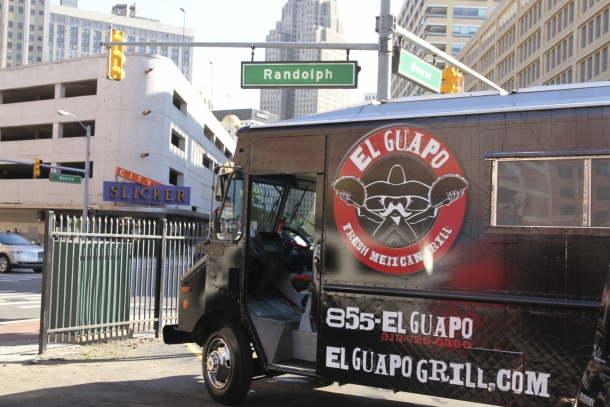 The Michigan Economic Development Corp. has announced the approval of $77,775 in grants for eight food trucks around the state. Local recipients — which will provide a total of nearly $145,000 in matching funds — were Detroit Pommes Frites in Southfield, Plain and Fancy Food in Pontiac, and Taco Now in Flint.

The one-time grants were provided through the 2013 Mobile Cuisine Startup Program.

“The food truck business is booming and on the road to becoming a $2.7 billion dollar industry by 2017,” says Michael A. Finney, president and CEO of MEDC. “Mobile food trucks attract foot traffic to downtown areas and create a unique and flavorful dining experience.”

Anthony Curis, co-founder and partner of El Guapo Grill along with Dan and Lindsay Gearig, believes the “food truck industry is synonymous with industry in Michigan as a whole,” Curis says. “People are thinking smarter, smaller, and more efficient. Small and micro-businesses have a voice in this new creative economy.”

And that voice is especially well heard on the campus of Wayne State University in Detroit, where Curis and his team oversee the growth and management of several food trucks. “It’s an exciting program that is working well,” he says. “We’re starting this week on campus with a handful of trucks, including El Guapo, the Mac Shack, Corridor Sausage, and the Beignets truck.”

El Guapo, founded in 2011, is the first licensed Detroit food truck in the city’s history, a claim that took some time to achieve.

“Contrary to what was printed in a few articles, the city of Detroit was great to work with on the permitting process,” Curis says. “The issue was getting around the archaic city ordinances that were written in the 1940s. We had to collectively find a way to legally work around them while remaining compliant.”

Today, the ordinances pose less of a problem, and Curis estimates that there are about a dozen food trucks operating in Detroit, although “the only ones operating regularly in the downtown area are El Guapo and the Mac Shack.”