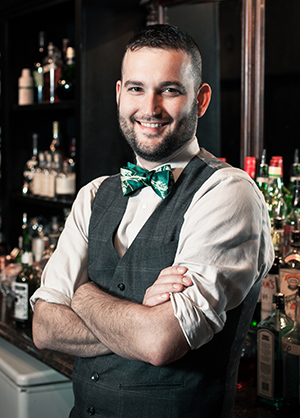 Sandy Levine, owner of The Oakland Art Novelty Co., a craft cocktail bar in downtown Ferndale, spoke with DBusiness Daily News about hiring authentic people over actors, reading the temperament of guests, and modifying rules on the fly.

1. DDN: How do you approach guest services at The Oakland?

SL: To be a good bartender or server, you have to have a good hold on how to be empathetic and to be able to understand exactly where a person is in their evening — sort of determining their tastes and why they’re there. About a week ago, we got a letter from someone who came here right after their mom died and said that it was exactly what they needed. They needed to be in an atmosphere where they could just chill out because it had been such a hard day. And you know, they (could have been) sitting right across from someone celebrating a birthday, with somebody down the aisle that was just out to meet a friend. We need to be able to provide completely different service to different people based on what they want or what they consider good service.

2. DDN: How important is good customer service to you?

SL: When I interview someone, if I think they’re going to end up working with us, I try to be as forthcoming as possible about what is important in terms of working here and what will make people either successful or unsuccessful. The things I always say are most important are: the way you treat the staff and the way you treat the guests. A distant second is how hard you hustle and how willing you are to learn (cocktail recipes and techniques) — and to do so in a humble and gracious way.

3. DDN: Why do you place staff treatment above guests?

SL: I learned that from Danny Meyer, who is a restaurateur in New York and is credited as being a huge innovator in terms of restaurant hospitality in modern times. It basically amounts to the fact that if a staff is not happy and they’re enjoying what they do, then there’s no way they’re going to be able to transfer (a good experience) to the guests. I’ve been in the restaurant industry my whole life, and there are a lot of places I’ve been where people talk about servers and bartenders being actors. That’s one thing that really gets under my skin. If you have to act like your hospitable, you’re in the wrong business. You have to be a person who’s easy to get along with.

4. DDN: You adopted house rules like no talking on cell phones early on, what was the reception?

SL: The reason we did that was to make it a better experience for everyone. That way, you don’t spill your drink all over yourself after somebody bumps into you (while they’re on their cell phone), and people aren’t shouting at the bartender an inch from your ear. We (made the list when we first opened) in the name of good service, but we started to learn that having rules is something that turned off a fair amount of people.

So, we still have (the rules) hanging in the bathroom, but the only thing we enforce is seating capacity, which is determined by the fire code than anything else. So once we fill up, we go on a wait. During the summertime, it usually doesn’t go much longer than 30 or 45 minutes, (but) it can get kind of ridiculous in December, when we fairly often hit two or three hours (of waiting time).

5. DDN: How do you keep customers coming back?