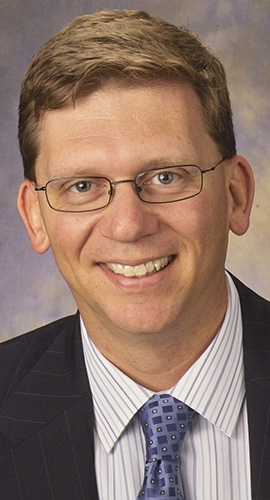 Roger Curtis, president of the Michigan International Speedway in Brooklyn, spoke with DBusiness Daily News about the future of NASCAR, winning over fans, and ratcheting up the competition among major automakers.

RC: It’s been a paradigm shift for us. We wanted to flip the model around from the bottom line driving what we do for our fans, to what we do for our fans driving the bottom line. It started with a vision statement to create lasting memories for every person every time, and recognizing that fans choose to spend their money and time with us. We don’t make something tangible. It’s not gas for the car, diapers for the baby, or milk for the fridge. This is something that fans are choosing to do, and it has altered the way we do everything. Our whole culture changed. Our vision statement isn’t just some kind of plaque we put on the wall. We made it part of our DNA, and we wear it on our sleeves. Instead of (guest services) being a department, it became a way of life for us. And a lot of what we do now is modeled after Disney more than it is sports. So, when we started to have that kind of view of our business, it prioritized our initiatives for us.

2. DDN: What kind of initiatives?

RC: We had to fix traffic (before and after races). It was the worst in all of NASCAR. There were times we would start the race and wouldn’t have everyone off the road. And we had a lot of fans tell us “Hey, MIS is a great experience until the checkered flag falls, and then it’s terrible getting out of there.”

We got Director (Kirk T.) Steudle involved from the Michigan Department of Transportation. We didn’t ask for an interstate or new roads. We just said, “How can we better utilize the ones we’ve got?” He helped us do that. (Before), it took about five hours to get the last person that wanted to leave out of the parking lot. Now we’ve got that down to about 1 hour and 20 minutes. And the average wait time, once you get to your car and are out on the highway, is 15 minutes. That’s been a game changer for us because I know we were losing fans because of the traffic situation. It wouldn’t have surprised me if we had lost one of our dates if we hadn’t fixed that traffic.

3. DDN: What are other significant changes have been made?

RC: I inherited an antiquated facility — the scoreboard, the PA (system), and a lot of the seats were from 1968, when the track was built. Since 2007, we’ve invested $80 million in the facility and made a ton of improvements in the fan experience.

(Because of the impact of the recession), we also looked at the price value relationship — the price of our tickets versus the experience fans were getting. So we lowered our ticket prices back to where they were in 1998. We wanted to make it affordable for families, so we made kids 12 and under free. And we ramped up the experience. We added a welcome center and a kid’s zone. We’ve got concerts going on, and we introduced free Wi-Fi hotspots last year. We’ve tried to make it a true experience of which the race is just a part of it.

4. DDN: What new marketing initiatives have you initiated?

RC: I think for a few years, when we saw how many account holders we were losing from Detroit, we started to focus on some other markets. But we’ve (since) had the realization that even though the number may be lower, it’s still the biggest market that we have. And so we really started in earnest to focus (our ad campaign) on Detroit again last year. We’ve got Quicken Loans as a partner on the June race, (and) Pure Michigan is our title partner in August. There are some great synergies there.

We’ve started to work more with the manufacturers involved in NASCAR — Ford, Chevy, and Toyota — which are either headquartered here or have an extensive presence in the state. We developed a trophy just for them called the Michigan Heritage. We made it like the Stanley Cup, where the winning manufacturer gets it after each race, but they have to bring it back and re-win it. At the end of the year, the winning manufacturer gets to choose a Michigan-based, youth STEM-related charity to give $40,000 to. Last year, (Ford Racing won), and the Michigan Science Center was the inaugural recipient.

5. DDN: What do you think about the new car designs, which look more like showroom models, for the NASCAR Camping World Truck Series?

RC: I think it goes back to last year’s changeover in the NASCAR Sprint Cup Series to what they call the Gen-6 cars, which was essentially getting the showroom-model look back onto the cars on the race track. NASCAR had gotten away from that the last few years for a variety of reasons, but I think they heard from manufacturers (who were concerned about) losing their brand identity. NASCAR is a proving ground, (and) manufacturers want to go out there and win. And when they win, they want people to recognize, “Hey, that’s a Ford, that’s Chevy, that’s Toyota.” The relevancy for generations was “Win on Sunday, sell on Monday,” and we kind of lost that connection.

So last year, they brought out the new Sprint Cup Series cars, and it hit a homerun with everyone — the fans and the manufacturers. After that, they came out with the new Tundras, Silverados, and F-150s this year, which is great for fans. We were starting to feel the impact of having these generic cars and trucks. Because of the presence of the auto industry in Michigan, our fans were probably even more disgruntled than most. Likewise, now they’re more excited than most.