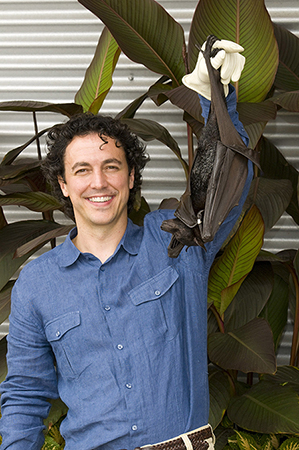 Rob Mies, executive director of the Organization for Bat Conservation, a bat sanctuary that promotes preservation education at the Cranbrook Institute of Science in Bloomfield Hills, spoke with DBusiness Daily News about its recent collaboration with members of the upcoming movie Batman v. Superman and the economic significance of a dwindling bat population.

1. DDN: Your organization released a new public service announcement this week with the cast and crew of Batman v. Superman. How did that come about?

RM: This was such a unique experience and opportunity because they were right down the road from us. Zack Snyder (the director of Batman v. Superman) had heard about the disappearance of bats on the news and came up with the idea to repurpose the movie sets into bat houses when they were done. So they contacted us and asked us if that’s something we would be interested in doing with them. And I just laughed, because that’s exactly what we do. It was just perfect, and it’s been such a great relationship. We’ve been very lucky to have Ben Affleck, Amy Adams, and Zack Snyder to stand up for bats and take this on as a cause.

2. DDN: What kind of response have you gotten?

RM: The video had over a million views in just three days (on YouTube and Facebook). It’s the biggest thing to ever happen to bat conservation. We’re getting emails and donations from Australia and Saudi Arabia and England. It’s reaching people. Movies do that. They reach across language and culture and nationality. When Ben and Amy and Zack stood up and said, “We’ll do something to help bats,” people started listening and it gives us the opportunity to present the message. We’ve been successful in the past. We talk to a couple hundred thousand people a year, but we’ve talked to over a million this week alone.

3. DDN: What’s the mission of your organization?

RM: Our goal is to raise awareness that bats are important, both ecological and economically, and that they’re in peril. We have far less bats that we did 10 years ago or 50 years ago. The biggest problem in North American is a fungus called white nose syndrome, which grows on bats when they hibernate in the winter. It wakes them up too many times, and they end up starving before the winter is over.

This fungus was first detected in 2006, in a cave just outside of Albany, N.Y., and has spread to 25 states and five Canadian provinces over the last eight years. Millions of bats die each year from it, and it continues to spread. We’re looking at least two or three species of bats being listed as endangered in the next couple of years. The little brown bats, which is one of the most common animals, will be at risk for extinction in at least 20 years.

4. DDN: How does the problem become an economic one?

RM: When we look at the economic value of bats worldwide in insect control, pollination, and seed dispersal, it’s in the trillions (of dollars). They are the primary predators of nighttime insects — they’re eating crops, and damaging forests and gardens — like spotted cucumber beetles and corn earworm moths. Agriculture spends millions and millions of dollars annually controlling insects, and these animals do it for free.

Worldwide, it’s shocking as to how many hundreds of species of trees are pollinated by bats, including the Baobob, which is the tree of life in Africa; mangoes; guava; and banana. And then the agave, which is what we make tequila from, is pollinated only by bats. There are parts of the world where people are up on ladders with little brushes pollinating fruit trees because the pollinators (the bats) have disappeared. The cost of that would be phenomenal if that went on.

RM: Because of the habitat loss that bats suffers, moms that live together in a nursery colony have a hard time finding warm, dry places to raise their babies — and that’s what bat houses provide. The other thing bat houses do is they provide alternatives so they don’t live in peoples’ attics or behind their shutters or in their garage. They’re a real win-win. They provide safe places for bats to raise their babies, (meaning) they keep bats in our neighborhoods and consuming insects

We actually just got the bat houses (from the Batman v. Superman collaboration). We’re going to be putting some up in Detroit and Pontiac, since those are areas that they filmed in. And then the the painted ones that were autographed by Amy, Ben, and Zack, are going to be auctioned off to help raise more money for our Save the Bats campaign. We’ll have an event sometime in the spring to auction them off.

To watch the public service announcement Batman v Superman: Dawn of Justice – Help Save the Bats, click here. For more information about the Save the Bats campaign, visit batconservation.org.