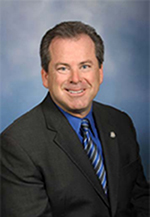 Last week, State Rep. Phil Cavanagh (D-Redford Township) formed an exploratory committee to run for Wayne County executive in 2014. Before coming to the House, Cavanagh served four terms as a Wayne County commissioner. DBusiness Daily News spoke with Cavanagh about public safety, the budget, and how he would do things differently if he were elected executive.

DDN: In your announcement about forming an exploratory committee, you mention attending the Wayne County Fiscal Crisis Summit. Was this the catalyst for your decision to pursue running for Wayne County executive?

PC: Ever since I was a commissioner, I have always thought that the county was mis-focused. I think at this point, the county is too focused on its image and trying to save face. There are some very tough decisions that have to be made, and I don’t think the administration is willing to make them.

I believe that our focus should be on public safety. We need to fully fund the sheriff, the clerk, the courts, and the prosecutor. If we’re going to keep crime at bay, we need to balance the budget. And I’m not sure it was balanced (since I left there) five years ago. The fiscal crisis summit brought that to life. An emergency manager can step in at any point, so there’s some urgency to this. There’s no more kicking the can down the road.

PC: If people pay their tax dollars, I believe 80 percent of the budget should be for public safety. (Right now), the county prosecutor is underfunded. The assistant county prosecutors have six times the caseload as their counterparts in Oakland. If you fund everyone — the sheriff, the courts, the clerk, the prosecutor — then it works as a well-oiled machine. If you fund two or four of the five, depending on who your political allies are, then it’s imbalanced.

I argue this point (at a time) when the state is in the process of cutting four Wayne County judges. I believe that crime is down only because the resources are not there to pick up criminals and prosecute them adequately. Once the prosecutor is fully staffed, and once we have enough cops on the street in Detroit, then we won’t have the backlog of cases. We won’t need as big a jail to hold people because they’re waiting for trial. It’s not a matter of building a bigger and better jail. It’s looking at the entire criminal justice system in its totality and getting it functioning correctly.

DDN: How would you approach the position if elected?

The county still has over 200 appointees, which is as many as, or more than, we had when the county had the airport. But now the airport is no longer under direct control of the county, and the Detroit-Wayne County Mental Health is now an authority, so that’s no longer a department. The budget used to be $3 billion and, since that time, have lost $1 billion when the airport authority was created and $650 million when the mental health authority was created. So I think we should have that many less appointees. Those are the kinds of things we really need to look at.

DDN: How does your background prepare you for this position?

PC: I’m an attorney. I have served at the Michigan Court of Appeals. I have clerked for a federal judge. But as a Wayne County commissioner for eight years, part of that time, I served on the Detroit-Wayne County Mental Health Board. On that board, there was an $18 million deficit that was proclaimed yet as soon as it was shown to me on the books, I corrected it almost overnight.

Then, when I went to the State Legislature, I saw how the state perceives Detroit and Wayne County. I worked very diligently and made some great relationships at the state level, and that really is what is needed. It isn’t to have the state write a big check, because they’re not going to come to our rescue and bail us out. But (in regards to) the relationships needed to negotiate practical solutions, I think I’m well poised for that.

DDN: Are there any governmental districts or leaders that are doing things well in your opinion?

PC: Our neighbors to the north and our neighbors to the northeast, they’re balancing budgets. The Southeast Michigan Council of Governments (SEMCOG) reported that the greatest impact of the recession of 2008 to 2010 was on Oakland, Macomb, and Wayne as far as property values and revenues going down. Leaders in (Oakland and Macomb) counties weathered the storm, and are rebounding and ready to take the resurgence in the economy.

These counties are affected by the exact same circumstances that we are. You can say that we have Detroit and its problems, but L. Brooks Patterson (the executive of Oakland County) has Pontiac and other struggling communities. Wayne County is just pointing fingers.