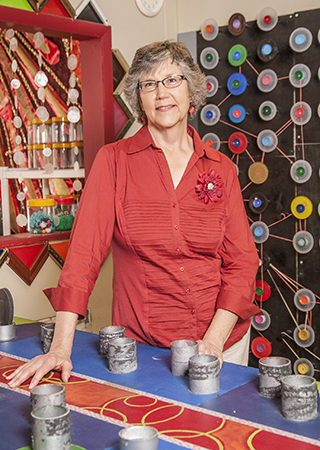 Since Arts & Scraps launched its mobile unit eight years ago, the 26-foot, custom bus has accumulated about 70,000 miles while visiting hundreds of schools and events within a 2-hour radius of the city. Peg Upmeyer, executive director of the Detroit-based nonprofit, spoke with DBusiness Daily News about the nonprofit’s programming for children and the trends she’s seen in corporate sponsors.

1. DDN: What is the Arts & Scraps Mobile used for?

PU: The bulk of what we do with it is our student workshops. We have 11 different curriculum lessons and there’s an individualized kit for whatever theme we’re teaching. And then after the students invent and build something in response to a challenge we give them, they get to stuff a bag with the 23 different materials we carry on the bus. There are tile and flooring samples and obsolete paint chips from Ford Motor Co. Just odd things they can use (to build and invent things) at home.

2. DDN: What is an example of one of the lessons?

PU: The easiest one to explain is healthy and mutated insects, where we work with the kids and talk to them about the attributes of an insect. If you’re a preschooler, you may not get any more than, “It has lots of legs,” but for students at a more advanced level, we talk about the head, thorax, abdomen, things like that. And then we say, “Now that you’ve learned what the attributes of an insect are, create an insect that nobody has ever seen before.” Then, they have to invent the second version of it that lives in a bad environment and has mutated, so they have to figure out a way that we could pollute an environment (and the impact the pollution could have). We’re not about fine art; we’re about everybody using their brains and designing and making things.

3. DDN: Where do you get the materials for these projects?

PU: There are 190 different factories and corporations around the city that donate 28 tons of stuff to us each year. When we first started in 1989, everybody thought we were crazy. But once the (green trend picked up) about five years ago, everybody got it. So we’re on the road 20 hours a week with another vehicle — not the bus — picking those materials up and bringing them back to our 13,000-square-foot building. (From there, the materials are) distributed among all of our different programs and then processed with 10,000 volunteer hours.

4. DDN: Where do your volunteers come from?

PU: We probably had about 5,000 hours last year through corporate volunteering. That’s a huge trend right now. Companies are realizing the value of the team building and getting people out in the community to do things together. Ford has been volunteering with us for 15 years, but I would say (others started to join in) about three years ago. And it’s really picked up in the last two years. 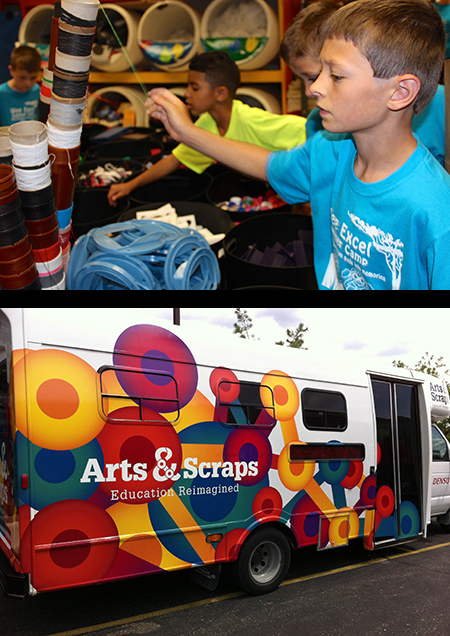 5. DDN: How else do you get community support?

PU: The old graphics on (the Arts & Scraps Mobile) were supposed to last for five years, and we made them last eight. The bus was starting to look pretty bad, so we knew we had to do something. Then I was at a workshop where the head of Team Detroit challenged the nonprofit community to come up with projects where they could help. So we submitted an application and we were accepted. We were treated just like any other client. We had meetings and approved things, and it was just a fabulous experience. They developed a whole new graphic image for us  — we even have a new logo and a new font that we incorporated into a new website that we were in the process of putting together at that point.

At right: Top: Students shop for materials on the Arts & Scraps Mobile. Bottom: The bus recently received a facelift thanks to a new, graphic wraparound.