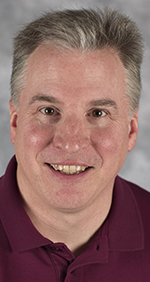 Mike Robert, vice president of sales and technology at American Dryer, which manufactures hand dryers used in public restrooms, spoke with DBusiness Daily News about foreign competition, the company’s more than 20 patents, and the technologies that help keep the Livonia-based company at the forefront of its industry.

1. DDN: What can you tell us about the world of hand dryers?

MR: The industry landscape has changed a lot over the years. There used to be many hand dryer manufacturers but, (after several consolidations), it’s really boiled down to three main companies that are left in the business. There’s us, here in Michigan, Excel in Massachusetts, and World Dryer out of Illinois. And of course, there’s a lot of foreign competition.

2. DDN: How do you stay competitive?

MR: All hand dryers used to be somewhat similar, but we were always a value leader in the marketplace. Any two given hand dryers might have been about the same, but you could get ours for a little less, and we were successful with that. But over the last several years, (things have changed so) if you want something that costs less, China has that for you. So (our leadership) decided several years ago (to position the company) as an innovation and technology leader. Over the past few years, we’ve filed for over 20 patents, which is really a remarkable thing for a small hand dryer company.

3. DDN: What is an example of these technologies?

MR: With high-speed hand dryers, the complaint can often be that maybe they’re a little too powerful, maybe a little too loud. And so ours are adjustable. They’re tailored so they can be adjusted in the sort of the way you turn the knob on the radio in your car. You can have it go really fast in a sports setting, like at the University of Michigan at the Big House. Or you can turn it down so it’s nice and quiet if it’s being used in a nursing home, school, or library. We’re the only people that do that kind of stuff.

But the big revolution we’ve developed is called Cold Plasma Clean technology, or CPC. It’s the world’s first and only hand dryer that kill germs and sanitizes (using bipolar ionization) without using any chemicals.

4. DDN: Where can people find your dryers?

MR: We export a lot of product to Europe, to South and Central America, and to Canada. We do a fair amount in Michigan, but there are other markets that are bigger for us — Texas, New York, and California. And we’re doing a lot of things in Detroit. We’re in two of the three major casinos, for example. We also work with Detroit Cristo Rey High School. There’s been a big resurgence in Michigan and in Detroit.

5. DDN: What do you attribute that to?

MR: In a way, we might have been at the right place at the right time. When we hit the (Great) Recession around here (in 2008), we came out with some new exciting products and our business really surged. In hard times, everyone is looking to save money. Most (public facilities) use paper towels, but (the facility) has to pay to replace them and pay to put them in a landfill. It’s very expensive. You can replace that with one of our hand dryers and the payback time is somewhere between three to five months from the initial cost of the dryer and installation. The overall cost savings is over 95 percent. So when times got tough, we were in a good position to save a lot of people money.

Another thing that came along was the green movement, where businesses, local communities, and schools are all trying to reduce their carbon footprint. Our products help reduce landfill waste because paper towers can’t be recycled.  (For businesses that) want to get their building certified to be green, our hand dryers give those buildings points that can be used to get LEED certification.