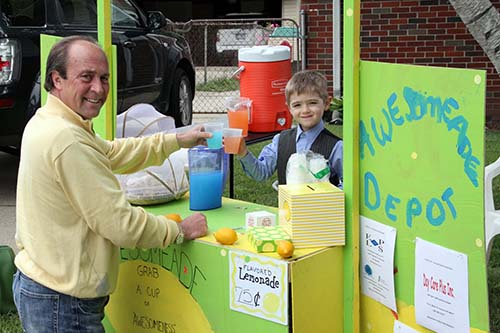 This Friday and Saturday, lemonade stands will be sprouting up throughout Detroit, Ann Arbor, and Flint as part of Lemonade Day Detroit, first introduced in Michigan by presenting sponsor Huntington Bank in 2011. Michael Fezzey, president of Huntington’s southeastern Michigan region and spokesman for the event, spoke with DBusiness Daily News about the benefits of the growing entrepreneurial program.

MF: Lemonade Day is an experiential process through which children learn what it means to build and operate a business. They do this through a time-honored tradition of building a lemonade stand. This originally started in 2007 in Houston, and I think there were about 3,000 kids that participated. Now, there are about 250,000 kids in more than 50 cities in the United States and Canada that participate. (Lemonade Day Detroit) has over 50,000 kids involved this year.

2. DDN: How is this different than youngsters setting up a stand on their own?

MF: What we attempt to do is take the children who participate in Lemonade Day through a process starting with capital investments — what’s needed to buy the sugar and the lemons. (We look at things) from a marketing and promotional standpoint, what the stand is going to look like, how are they going to market their product to customers, and what’s the right price for their product? In the end, we ask them to do three things with their profit: spend a little on themselves as a reward for their hard work; to save a little because they may need some money down the road; and to share a little. And that’s really one of the unique components of lemonade day — these children are asked to donate whatever they feel to a charity of their choice. And the results of that request have been rather significant through the years.

3. DDN: How much have the children raised?

MF: Since we began in 2011, there’s been $2 million in total revenue accounted for from these lemonade stands. And about half a million dollars has been donated to charities in our community through this program. These children are not obligated to give. They do this on their own accord and to whomever they choose to provide the donation to.

4. DDN: What do students gain from participating in this program?

MF: This is really intended to give young people life lessons of building and operating a business and what’s the responsible thing to do with their profits in hopes that these will be the future entrepreneurs and business leaders in our community. I’ve been impressed with the talent levels and the creativity of these children. Some of them sell other things in conjunction with the lemonade that they’re offering, and they get very creative with their marketing through their neighborhoods and communities. And I will tell you that very young people learn very significant lessons about life through this process. I have been incredibly impressed throughout the years in talking with the children about their lemonade stands and how much they’ve learned about themselves and their community.

MF: One of the things that impressed me about one of the students I spoke with last year from the Detroit Public Schools was the intuitive learning. When I asked this young man what he did with his profits, he said he donated it to a breast cancer (charity) because the principal of his school had breast cancer. And when I asked how he planned to grow his business next year, he said “We’re going to tell more people about breast cancer.” It was clear he understood and had picked up on this idea of cause marketing. That was very powerful.

To learn more about Lemonade Day Detroit, or to find a stand near you, visit detroit.lemonadeday.org.