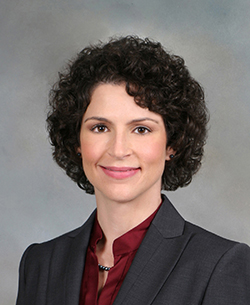 With Detroit’s successful conclusion of its Chapter 9 bankruptcy, DBusiness Daily News spoke with a key member of the turnaround industry, Meagan Hardcastle, president of the Michigan Chapter of the Turnaround Management Association and co-founder of business consulting firm Harmon Partners in Birmingham, about turning around under-performing companies, and the restructuring industry in metro Detroit.

1. DDN: How did you get your start in the turnaround industry?

I started in commercial banking and (then) I went back to school and got a master’s degree and came out looking to go into consulting in the turnaround industry. I worked for another firm for six years and then three years ago, a co-worker and I spun out and founded Harmon Partners.

2. DDN: How does a typical turnaround work?

It’s the specialized business practice of diagnosing and correcting the problems of a distressed company, to restore financial health and stability as quickly as possible. There are often both operational and financial issues to resolve in order to achieve a successful “turnaround” of a business, and the strategic changes that need to be made are often referred to as “restructuring” activities. Turnarounds are driven by performance improvements, cash flow management techniques, and extensive negotiations with creditors and other stakeholders. Most turnarounds are completed “out-of-court” however in some cases, the restructuring process needs to occur within the bankruptcy court system.

3. DDN: What early signs of distress should business owners look for?

Cash flow problems are the most obvious signal. When there isn’t enough cash to go around, companies are unable to make their payments on time, and a crisis of some sort eventually happens. But cash is a lagging indicator of trouble, and the earlier you identify problems, the easier they are to solve. So business owners should always be on the lookout for leading indicators of distress within their company, such as declining profit margins, quality problems, or increasing inventory levels. It’s not uncommon to get (to a distressed business) and there to be a panic about how we’re not going to make payroll next week. In our dreams, what we love to see is that they notice the signs of distress much earlier in the process because it’s quicker, easier, and so much less expensive for business owners to fix it earlier.

4. DDN: Once you’re hired, what is your first step?

Almost the first thing we always do is a weekly cash flow projection. Usually there’s not enough cash to go around, so then you start the process of figuring out how short are we and when, and then that can drive some of the decision making process. Also, it gives you a hint about the viability of the business. Every once in a while we come across a business that doesn’t have a reason to exist anymore due to a change in the industry. But in most cases, there’s a fixable company in there somewhere and then the lenders want to know, “how long is it going to take to for this company to get fixed?” If it’s a short period of time, maybe (the lender) can be a part of the solution, maybe they’ll lend the business a little more money if they have some confidence in the company. If there’s just too much to overcome, then the business owner would need to start looking at other alternatives, such as finding an equity investor or reducing payments to vendors.

5. DDN: What’s the climate for the turnaround industry in metro Detroit?

Detroit has a very robust turnaround industry and is sometimes referred to as the “birth place of turnaround” because many of the industry’s pioneers built their practices here. Our local market runs the gamut from international firms like AlixPartners serving large and publicly traded companies, to mid-sized regional firms, to smaller firms like Harmon Partners serving privately held companies. Conway & MacKenzie, one of our local industry pioneers, led the city’s restructuring process, and it was also great to see so many women playing key roles in the bankruptcy.

The Turnaround Management Association of Michigan’s annual Spring Conference will be held Thursday at the Detroit Athletic Club. This year’s theme is “Detroit’s Turnaround – The Inside Story.” The event includes panel discussions with several professionals who directly worked on the bankruptcy, city officials now responsible for implementing the restructuring plan, and a keynote presentation by Kevyn Orr, former emergency manager. Registration is open to anyone.