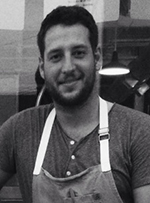 Marc Bogoff started hosting popup dinners as a way to build brand awareness for Stockyard, a food truck enterprise he and partner Mike Ivkov launched earlier this year. He recently spoke with DBusiness Daily News about the mobile food business, trends, and plans for the future.

1. DDN: How does running a food truck differ from a static location?

MB: Anyone who has opened a restaurant or business in general knows that there’s a lot of moving parts and hard work behind it. But when everything is mobile, it makes things a little more … well, you have to have more checklists with you at all times. We all have our personal vehicles, and then there’s the truck, the trailer, and the commissary. And we’re moving around. So there are a lot of notes, and I have checklists that are pages long that I use everyday. It’s how I’ve been able to stay on top of all the various tasks that need to be completed.

2. DDN: Do you have plans for a brick and mortar location?

MB: I’m trying to enjoy Stockyard (the popups and food truck) right now, but there are always things in the works. I don’t know that it would be a Stockyard brick-and-mortar, but we’ve been tossing around ideas. And I’d say it’s something that will happen probably sooner rather than later.

MB: Oh, yeah. From what I gather, the applications for the permits and licensing fees are through the roof. I’m sure there’s going to be some sort of cap on what’s going on. The towns and cities are still trying to figure out how to regulate things since there’s a lot of gray area. We’ve done our best to form relationships with other businesses, and to be a part of the community. I’ve met so many chefs doing this, and I think the collaborative nature is great. But I also think that (the market) could get saturated quickly, so I’d like to see some sort of regulation on the quality of the trucks being put out there. But who am I to say, right?

4. DDN: What new food trends are you seeing?

MB: I try not to follow food trends. I like to be aware of what’s going on and what people are into, but still kind of work with things that I think will open up people’s eyes to new flavors. Like the broccoli melt, which has gone over really well with the vegetarian community. I change it up every so often. Right now, it’s broccoli with provolone cheese, fried shallot, garlic aioli, and marinated tomato

I had planned on rotating the menu more than I have been, but I don’t want to get rid of things before people know what they are. I put the poutine fries on the menu, and have been trying to get rid of it since July — we’re making hot gravy in a hot truck — but everyone seems to enjoy it. I can’t seem to get rid of it, but I guess that’s a good problem to have.

5. DDN: What’s next for Stockyard?

MB: We’ll probably revamp the menu a little bit for fall. I think we’re at a point in the operation where we’ve worked out most of the kinks and I can start to focus on the food aspect more than the daily ins and outs and all of the chaos that goes into it.