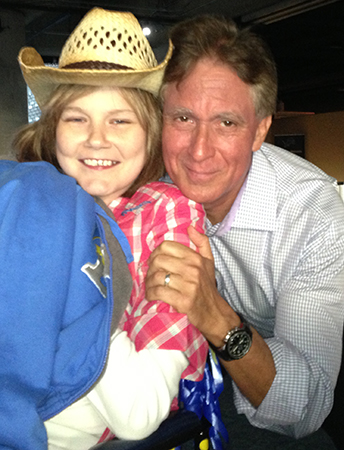 Keith Famie, a 10-time Michigan Emmy award-winning director/producer in Novi, spoke with DBusiness Daily News about his latest documentary project, which tells the story of Maire Kent, who died of sarcoma cancer at age 24 and requested her ashes be sent to sea.

1. DDN: Tell us about Maire’s Journey.

KF: The project started out as an interview for a documentary series I was working on (The Embrace of Dying). But, as time progressed, I ended up doing more interviews and it became apparent that her story should not be broken up into an episode of a series.

When Maire entered hospice — she clearly was not going to beat this — we had a lot of conversations about her desire to be cremated with her ashes (setting sail) in Lake Michigan. It was a way for her to see the world, which is something she never had a chance to do. Making a long story short, her ashes ended up in a small wooden sailboat built by George Wurtzel, a blind carpenter, and painted by an Odawa Native American. We had a ceremonial launch at sea with three Odawa women singing a strong women’s song in their native tongue, with (Maire’s) family standing by her side.

2. DDN: What type of reaction did you get when pitching the concept to people?

KF: Most of the time, you’d have to go, “Hello? Hello? You still there?” Because naturally, you think people had hung up on you because you just explained something that was totally ludicrous. People go, “Yeah, right, OK. That’s a great fictitious story.” But it’s true. It’s real. And what became so extraordinary about the journey was — as we had anticipated — Maire’s story resonated with hundreds of people (as her boat traveled to other parts of the Northeast, including New York Harbor). Everybody has been touched by cancer in some way or will be, unfortunately, so Maire’s journey became everybody’s journey. People had their own moments of refection, their own epiphanies about what they would if they were going to die, their own memories of loved ones they had lost. And the whole trip became this platform of discussion from young kids to people in their 60s and 70s. I think that’s probably the most touching part about what we did in this production.

3. DDN: How does this project compare with past projects you’ve worked on?

KF: I always seem to say that the project I am working on at the time is the most important I have ever done. Maybe I do this because I become so emotionally attached to the stories and people. (For example), with One Soldier’s Story, (which is) about what a family goes through when losing their son (Sgt. Michael Ingram from Monroe) in war, I felt it was so important for society to fully understand the cost of war. Can You See How I See (shows) what it’s like to live blind. I spent two years filming with people who live in darkness and yet are some of the most productive, inspirational people I have ever met.

I can say this about all of my films. The only reason these films get made is because I become so personally tied that I have to find the funds to produce them.

4. DDN: How tied did you become to Maire’s Journey?

KF: Maire Kent and I became close. I became part of her personal team trying to help her beat cancer. I was there when she took her last breath. I went with her to the crematorium. I made sure she made it to the sea. I have seen the impact from the thousands of people she touched on her journey. I fully understand how cancer can tear a family apart and bring them together. So I feel Maire’s Journey will be the most important film I have made. (It) for sure was one of the most difficult — especially the journey. Many days, we had no idea what was going to happen or who we would meet. This also made it very exciting. Maire took us all on a journey.

KF: We are editing a short trailer to get up online, hopefully by the end of Thursday. We have well over 120 hours from the past two years, (and) we’re going to start the editing process, which will take us three to four months (to complete). We’ll submit it to film festivals. And any time we do we do premieres, we want to do it so it somehow benefits local organizations that support issues that families face with cancer.

I hope this film will speak to the audience in a way that directly impacts their own lives, helps them through a rough day (and to) understand that to be compassionate to each other is one of the best gifts you can give humanity, that the difficult day you are having may not be as tough as the day someone else is having, and that, just possibly, death is not the end of the journey.