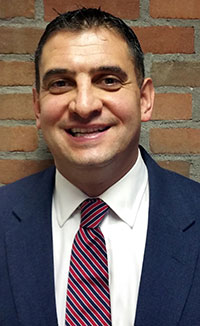 Gregory L. McPartlin, managing partner and co-founder of Parjana Distribution in downtown Detroit, which recently opened offices in Washington, D.C. and California, spoke with DBusiness Daily News about the company’s technology and positioning Michigan as a global thought leader in water management.

1. DDN: What does your company do?

GM: Parjana is a paradigm shift in regards to the way the world manages water. Just as an example, you collect storm water in the sewer, which is then taken to the water treatment center and then probably down to the river. It just keeps moving the problem from one area to another. With Parjana, the technology actually enables the earth to naturally absorb the water when and where it falls.

GM: If you were to take away everything that we’ve built, the earth would naturally absorb the water. But the problem is that we keep building more roads, more buildings, and more infrastructure, which impedes the earth’s natural ability (to absorb water). If you cover five of 10 square miles of open grass with cement, now 10 square miles of rain has to absorb in five square miles.

3. DDN: How does Parjana’s technology help in the reabsorption process?

GM: The earth is like a sponge. If it’s too wet, water doesn’t absorb. If it’s completely dry, the water just rolls off. Our technology uses three main forces — gravity, hydrostatic pressure, and a vacuum — (along with plastic tubes) to stabilize the moisture levels within the earth, keeping them consistent to enable the earth to naturally absorb the water when it rains. The (plastic tube) itself is 1.25 inches in diameter and, on average, 10 feet to 20 feet in length.

Think of when you siphon water out of a fish tank. No matter how much water you have in that fish tank, once you start that siphon, the siphon never stops. We’re basically doing a similar thing (where our product) creates a siphoning effect within the earth (and pulls ground water below the surface).

4. DDN: Why is this significant?

5. DDN: Who uses this technology now?

GM: We’ve done backyards in Grosse Pointe, and we just did 24 acres of 1,000 acres on Belle Isle. There’s third-party data from a local engineering firm (Environmental Consulting and Technology) that shows we’ve already reduced storm water flow on the island by 63 percent. (The company installed its system at the Coleman A. Young International Airport in Detroit, and is working with other airports to reduce standing water, which attracts birds.)

We’re also working with the University of Michigan, along with Highland Park, to model a water neutral city. Cities spend millions of dollars to manage storm water and to build storm water infrastructure, but with our system, that infrastructure doesn’t need to be built. Our vision is to build an entire city with no storm water management facility. (We hope to have realized that goal in the next) 18 months.