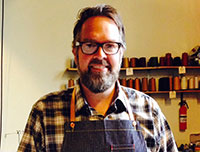 Eric Yelsma, founder of handmade apparel company Detroit Denim Co., which operates out of Corktown, spoke with DBusiness Daily News about American-made products and what it’s like to sew jeans in Michigan.

1. DDN: What are some of the challenges to running an apparel business in Michigan?

DY: There are plenty. One of the main challenges is finding experienced people. The apparel business is so small in the U.S. versus what it used to be. In the ’60s and ’70s, (I think about) 90 percent of our apparel was U.S.-made. Now it’s less than 3 percent. It’s just like a long-gone industry. There just aren’t many people, especially in the Midwest, that have sewing experience or production sewing experience. So, we bring people on board and there’s training that has to take place — a lot of training — to get to where we need (them to be).

2. DDN: Where do you source your materials?

DY: (That’s) another challenge. There (aren’t) the resources that you might have for another industry. We’re a little limited right now with the denim that we use. I get it from a supplier, Cone Mills, in North Carolina. They’re the only U.S. denim mill left that makes the type of denim that we use. So, we’re kind of limited in some of those manners.

3. DDN: Why is it important for you to keep things American-made?

4. DDN: What made you decide to bring your business to Detroit?

DY: I grew up in Kalamazoo, but I’ve lived in southeast Michigan for about 20 years. I couldn’t have done this in any other large metropolitan city other than Detroit just because of the (lack of) barriers of entry, the community that we have here, and just the sheer ability for me to get this started.

DY: We do only men’s jeans right now, but in 2015, we’re going to start doing women’s jeans. We’ll probably have two to three styles, but we’ll also offer a full-bespoke option where you would come in and actually get fitted for your own custom jean, because women tend to be a little more complex in their fitting.

Our goal for 2015, or potentially 2016, is to graduate from Ponyride (an incubator in Detroit), and move into our own location, and have our own flagship store in the city.