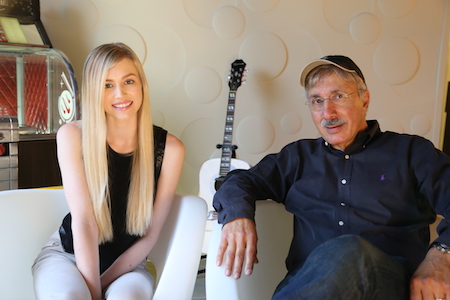 Dan Yessian, owner of Yessian Music in Farmington Hills, spoke with DBusiness Daily News about his latest project, a one-artist music label called, Late to the Plate, and a new song he wrote for America’s Thanksgiving Day Parade, to be performed by Cassaundra Fitch.

1. DDN: You first launched Yessian Music in a Farmington Hills bait shop in the 1970s. What is the company doing now?

DY: We predominantly do national spots, whether it’s for Dodge, Coca-Cola, or promos for NBC’s Revolution and Blacklist. We do a lot of music for theme parks across the world, from Dubai to Shanghai to Canada to London. Two years ago, we produced all of the music you hear on United Airlines, (and) we just finished up a project with the Detroit Symphony Orchestra for ESPN College Football. All of the music branding we’ve done for them will be used for the next several years.

Both of my sons, Brian Yessian and Michael Yessian, are involved in the business and have taken us to a level where we’re an international music company. We have our facilities here in Farmington Hills, but we also have studios and offices in New York, right on Fifth Avenue; Hamburg, Germany; and Los Angeles. And since my sons have been very astute at the business, it’s given me the opportunity to do what I’ve always wanted to do, which is songwriting.

2. DDN: What projects are you working on?

DY: Through some happenstance, a former client of mine introduced me to (singer/songwriter) Cassaundra Fitch by showing me a video she had done while she was at Michigan State University. So I formed a music label called Late to the Plate, the reason (for the name) being after 40-plus years, I’ve been able to get back to my first love, which is songwriting. And for Cassaundra, she’s made a U-turn after graduating this year from nutrition into music. It’s been an interesting (ride) for both of us, myself being 70 years old and she being 22. Music can be fun, but it also is a great journey. I get to see her excitement as she delves through this with me, which is gratifying.

3. DDN: Do you plan to represent any other musicians?

DY: Right now, Late to the Plate is all about one artist. I don’t think I’m going to have the energy to go through with launching two or three or four more artists. (Laughs). So I’ve invested my resources and my time with her, because I really do value what she’s got. I’ve worked with a lot of great singers in my lifetime, from Motown singers to Faith Hill and Carrie Underwood, (both of whom) we worked with doing Sunday Night Football. So I’ve seen and heard them all, and I’ve found something extraordinary in her voice and her ability to write lyrics.

4. DDN: How was it making the transition from corporate jingles to consumer music?

DY: Well, you know, jingles are an underestimated craft. When they’re done in a good way, they make a clear message within 30 seconds. And for the most part, it’s done in some kind of song that ends with a lyric in the last five or 10 seconds. You have to make sure your message is clear, without getting in the way of the product. It’s work for hire.  (With creative songwriting and Late to the Plate), you have your own latitude. But you still have to be within the mark of whatever genre of music that you’re trying to create so that you’re competitive with the pop world or folk world or jazz world, or whatever it is that you’ve to set out to do.

5. DDN: What do you like to do when not working?

DY: I enjoy the family life. I get to go home and play on my grand piano, which was once owned by Burt Bacharach. These days, a lot of people don’t know who he was, which kills me. They might say, “Oh, is that the guy who played in Mike Myers’ Austin Powers movies?” Which was just a dent (in his entire career) that goes back to (writing songs like) Raindrops Keep Falling on My Head, Walk on By, and the Look of Love. So I think if you’re going through life trying to make a mark so that people remember you, it’s completely useless. Just do your thing, and enjoy the ride.

On Nov. 27, Cassaundra Fitch will perform “Tell Me I’m Not Dreaming,” a song written by Yessian, to kick off America’s Thanksgiving Parade presented by Art Van. For more information about the event, click here.