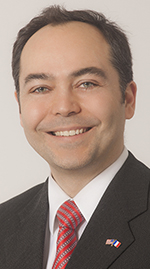 Cedric Ballarin, president of the French American Chamber of Commerce — Michigan and vice president of Faurecia’s North American headquarters in Auburn Hills, spoke with DBusiness Daily News about the chamber’s activities and what draws French investors to Michigan.

1. DDN: Tell us about your organization.

CB: The French American Chamber of Commerce has approximately 22 chapters in most major cities of the United States, such as Los Angeles, San Francisco, New York, Atlanta, and Detroit. The association in Detroit is a nonprofit and represents most French companies of an industrial interest in Michigan and also helps foster trade between France and Michigan by giving smaller companies in France access to information and contacts that will help them invest in Michigan and settle their industrial operations or offices (here). Our association activity centers on networking, education, and providing scholarships and grants to students who have business projects that they could or would like to realize.

2. DDN: How would you describe the French representation in Michigan?

CB: There are anywhere between 6,000 to 8,000 French citizens residing in Michigan. I would say that approximately half of them are directly related to the automotive industry. So you have very large, global corporations like Faurecia and Valeo, which — because of the dominance of the automotive industry in Detroit — have to have subsidiaries in the region support their customers.

Just another metric, France is the third largest foreign investor in Michigan. And again, based on the strength of the automotive industry, Faurecia, which is French owned, is the fifth largest automotive component supplier in North America today. I do not know how many jobs are related to French companies in Michigan, but it’s definitely in the thousands.

3. DDN: How have you found the business climate in the state?

CB: I would say it’s very positive. We all experienced the big crisis of 2009, when the economy was in a very bad place. But it allowed both the automotive industry and also the components suppliers to restructure and, today, we are seeing the true benefit of the rebound in the volume (of production and sales). The attractiveness of Michigan is related to the rebound in this industry and all of the new ventures that this industry is providing. (Investors are also attracted to) availability of capital, proximity of the customer bases, low cost of living, access to culture in a large metropolis like Detroit, and ease of transportation.

4. DDN: What are other French companies are finding success in Michigan?

CB: E-Validate (in Troy) is a small company that specializes in validation software for automotive program application. Their value proposition is centered around the integration of various reporting tools into a web database. GoGo Squeez (which has a factory in Traverse City) is the subsidiary of a medium size French company that came up to the market with an innovative way to package apple sauce for the modern family on the go. Vizua3D is a French start-up developing a new product concept at the intersection of the MRI and 3-D printing … they are not yet in Michigan but could be.

All these companies have in common a sense of innovation. The quality of the education system in France allows for young engineers and businessmen to foster the capabilities to adapt or create products that meet the new demands of consumers. They will bring jobs, contribute to the growth of the local economy, and provide diversity of thinking that will foster further creativity in return.

5. DDN: What’s next on the chamber’s calendar?

CB: We are very excited about our fundraising event coming up on May 23. The event will take place at the Detroit Athletic Club in downtown Detroit, and this year we’re celebrating something very unique, which is the defense industry of Michigan. We’re expecting about 200 guests and are celebrating the special ties between France and the United States as it relates to defense. And we are celebrating the 70th anniversary of D-Day.