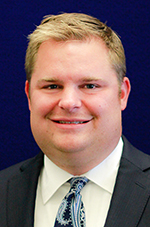 Brad Williams, vice president of government relations at the Detroit Regional Chamber, spoke with DBusiness Daily News about Proposal 1, a statewide initiative that will be included on the Aug. 5 ballot. If passed, the Chamber estimates the elimination of the personal property tax could create 15,000 jobs and encourage new equipment purchases.

1. DDN: Why is Proposal 1 so important to the city?

BW: It’s really the finishing touch on the effort to repeal the personal property tax, (which is) somewhat of a misnomer. People hear personal property tax, and they think that’s the tax they pay on their home every year. But individuals don’t pay this tax —businesses pay it. When a business buys a piece of equipment, they pay the sales tax on it and then continue to pay the personal property tax on it every single year after that. And as the equipment depreciates, (the tax) goes down slightly, which creates kind of a perverse disincentive for businesses to upgrade their equipment, which could lead to more energy efficiency or new jobs.

(This proposal) will impact small businesses immediately and then over time, it will impact larger businesses. And we need voter approval on it for the reimbursement mechanism (it includes) for the local units of government who are the beneficiaries of the personal property tax. So (the Detroit Regional Chamber is) asking for people to vote yes on Proposal 1 so we can eliminate the double taxation without a tax increase while making sure that our local communities have a stable funding source to pay for police and fire and parks and roads and all of the great services that we’ve come to expect.

2. DDN: Where is the replacement reimbursement coming from?

BW: It’s a fairly complicated mechanism, and I think that’s why were seeing some confusion from voters on it. It’s a mix of funding that dedicates a portion of the state’s Use Tax that currently goes to the general fund to the local services authority which will then distribute the revenue to local units of government. There will also be a small essential services assessment levied statewide on personal property, so it will represent about an 80 percent cut overall to even the largest businesses on their personal property tax. And then, finally, we’ll take the revenue from expiring tax credits — for example, the MEGA (Michigan Economic Growth Authority) tax credit, which is an economic development credit we had under the MBT (Michigan Business Tax) — and that will back-fill the general fund.

3. DDN: You mentioned that there has been an ongoing effort to repeal the personal property tax. Can you expand on this?

BW: There have been lots of conversations and efforts to get this off the books, and the replacement revenue for local government has always been the stickiest part. Local governments know this is a bad tax. They don’t like it. In some instances, it costs them more to collect the tax then they earn off of it. But at the end of the day, the revenue is very important to them — particularly in cities that have heavy industrial investments like Detroit, Warren, and Dearborn. It’s a huge part of their annual budget, so if you were just to eliminate the personal property tax without any concern for the local units of government, some of these cities wouldn’t be able to provide the services that not only do their citizens need but that their businesses need as well. Businesses need strong police, they need a strong fire department, and they need a good road network. So this really is a creative and innovative way to make sure we’re improving our tax policy while also allowing our local governments to maintain the services that we all need.

4. DDN: What does the tax cost the average business?

BW: It varies on what kind of business you’re in. If you’re an accountant, you’re probably paying a smaller personal property tax on (things like) desks and computers. Whereas, if you’re a small manufacturer — say a tool and die shop, where you have very expensive tool and die equipment — your personal property tax is significantly higher. And these businesses, particularly these manufacturing businesses, are looking for every edge they can get to make sure they’re competitive. Every dollar they have to spend on taxes adds a dollar to the cost of their products and maybe they can’t sell it to a final manufacturer. So getting this double taxation off the books is really going to be crucial to them. We’re estimating that it’s going to create 15,000 jobs in Michigan just by eliminating the double taxation.

5. DDN: Do you see any benefits beyond job creation?

BW: The thing you’ll see most often is probably (manufacturers) upgrading their machinery, because that’s what the tax is on. It’s not on your land or your building, but the equipment you have in that building. So as the old equipment depreciates, the tax bills becomes lower and lower. And if you buy the new equipment, then all of a sudden, you’re paying your full property tax on the full purchase price. Reducing this burden could very easily translate into increased compensation, renovations of current spaces, and job creation.