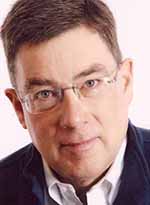 Founded in 1939, the Automotive Hall of Fame moved to its present location in Dearborn in 1997 and celebrates its 75th anniversary this year. Bill Chapin, the organization’s president, spoke with DBusiness Daily News about relevancy, reinvention, and the future of the museum in a global industry.

1. DDN: What was the Automotive Hall of Fame like when you first took over?

BC: The Automotive Hall of Fame had lost complete relevancy. It wasn’t relevant to either the auto industry or the city of Detroit. We had over 500 people that we had honored over the years, and we hadn’t communicated with them.

BC: We’re really starting from scratch. (We are not) a startup because we’re 75 years old, but I’m calling it a re-startup because we are going through exactly what a startup goes through. It’s very much been a work in progress over the last couple of years.

I think the real effort here is not necessarily on the bricks and mortar here in Dearborn —it’s about telling the stories not just here but outside on the Internet. We’re making sure that the stories we tell are very relevant to the auto industry today.

3. DDN: What kinds of stories?

BC: During the auto show, Chevrolet launched the new Corvette Z06, so we had the opportunity to talk about one of our inductees, Zora Duntov, who created the original 1963 Corvette Z06. Duntov was an icon at Chevrolet and General Motors. For his work to be remembered in 2014 with the new Z06 is pretty remarkable.

This year is also the 100th anniversary of the Dodge brothers and the 50th anniversary of John DeLorean and his Pontiac GTO. Our job is not to sit here and dust the file cabinets. It’s to link our stories (and) our inductees to current events.

BC: It’s not just about creating exhibits here in the museum, it’s really about telling (our honorees’) stories on our website. When Automotive Hall of Fame first started inducting people, the U.S. produced 90 percent of the world’s car production. It was the center of the global industry. With the way the market is right now, the U.S. is still a very significant country, but there are cars now being built in about 18 different countries.

We now have an opportunity for a global footprint because of the magnitude of the auto industry around the world. I believe that the stories we can tell about some of the pioneers in the auto industry over the last 100 years in the United States are relevant to young managers that work in the car industry in China and Korea and a variety of other places. There is an opportunity for us to tell the global story rather than just (the story of the) Detroit or North American industry.

5. DDN: Do you foresee an increase in foreign inductees?

BC: I would say 20 percent of the people we have honored have been from outside of the U.S., but they have contributed in one way or another to the industry in the United States. I think that’s going to change. Most of the non-U.S. inductees are predominantly from Japan, the United Kingdom, Germany, France, or Italy — (homes of) the traditional vehicle manufacturers in Europe. But I see the day where we’re going to be honoring people from China, which is the number one car producing country in the world, and there are going to be others that follow.