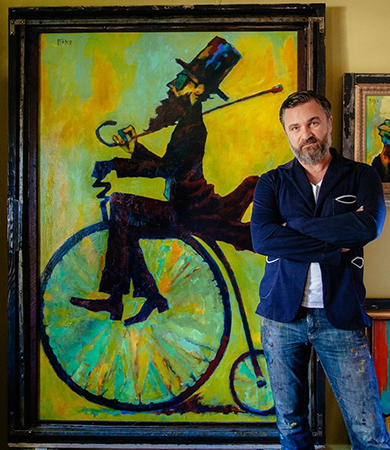 Plymouth-based artist Tony Roko spoke with DBusiness Daily News about his permanent art collection on display at Bacco Ristorante in Southfield and his unusual journey from working the assembly line to securing commissions from the likes of Lady Gaga and Jay Leno.

1. DDN: What have you been up to recently?

TR: I just got back from a solo show (at Alexander Salazar Fine Art, a prominent gallery) in San Diego. It went really well and raised quite a bit of money for the New Children’s Museum. (I also just) finished a commission for Bacco. They had reached out to me in November because they’re doing renovations and wanted to feature a local artist. There’s going to be a private unveiling of the collection (in late February, early March).

2. DDN: What did the project entail?

TR: I did 10 pieces for the permanent collection, (where) I tried to create a community of service industry workers — a chef twirling pasta, a baker holding some fresh bread. It was quite challenging because (I’ve found) there’s a void in art for restaurants. People have sort of portrayed the food industry as this whimsical and lighthearted place. There are a lot of jolly chefs out there. But through research and observation at Bacco, I saw that there’s a lot of a lot of heart and soul in the industry. The servers take their jobs very seriously. There’s a lot of pride. So that was a challenge, to represent the industry and do it justice.

3. DDN: You’re working with Detroit Public Television on a mini-documentary about your journey as an artist. How does the story begin?

TR: When I was 19 years old, I was hired to work on the (Ford Motor Co.) assembly line. During that time, I would take my breaks of to the side and do my sketching at lunch. Union and company management noticed I had this skill and they asked if I would be interested in spearheading this plant beautification program to boost morale amongst the line workers. I agreed even though, at that point, I hadn’t done much more than these small sketches and little paintings, so they pulled me off the line and had me work on murals on these 15-foot walls. I just began using a lot of the readily available materials in the plant like safety paints and industrial coating. (Now) I paint and create in that spirit to this day, with a lot of mixing, a lot of finishes, and different varnishes, oils, and acrylics. I really developed as an artist within the walls of the factories, (which is) very interesting to me in retrospect. It’s been a very unconventional path.

4. DDN: What else are you working on?

TR: I have a lot of commissions lined up. I’m doing a family portrait for the Rossetti family, who own Rossetti Design in the former Federal Reserve Building in downtown Detroit. I’m doing a portrait of Luciano (Del Signore) of Bacco Ristorante, and a commission for Bonnie Larson for the Detroit Institute of Arts. There’s been talk of doing a portrait of the Manoogian (family), the father and the son. For me, to be called on commissions and portraits of these predominant Detroit families and people who are so important to Detroit, it’s an honor beyond something I can articulate.

5. DDN: How did you first get into commissioned work?

TR: Commissions today are a lot different than the requests I had coming through the ranks. When I started, it seemed like I got a lot of requests where people wanted a sketch of their children or something of that nature. But somewhere along the line, I decided I wanted to create something I dreamt up, not necessarily something that someone else delegated. So, for years, I was adamant that I would only create whatever I was inspired to paint. It was a lonely period, but as I developed my style, I noticed those requests for commissions were coming back around, only now they were on my terms for pieces done in my style. They’re very challenging and, quite frankly, require a lot more discipline (than my freestyle pieces), but they’re fulfilling now because they’re in my style.