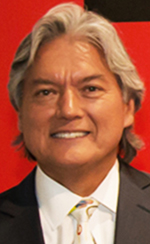 Dominic Pangborn — an artist who works in multiple mediums and sells his paintings through Park West Gallery in Southfield and opened a design-focused gift shop earlier this month at 335 South Main Street in Ann Arbor — spoke with DBusiness Daily News about his preferences for small-run productions and avoiding labels.

1. DDN: Tell us about your new store, the Pangborn Collection.

DP: It’s very eclectic. It’s a designers’ collective, so it’s not only my design works, but it’s comprised of many other designers like Michael Aram and (Michael Graves). (Our products) are from all over the world, whether it’s leather bags from Germany or home accent pieces from Paris. We travel all over the place to find things that are totally unique to the (Ann Arbor) market. My wife is the buyer, and she really does her homework. She doesn’t want to carry something that someone down the street has.

2. DDN: You’ve been designing neckties for quite some time. Do you still sell your designs through third-party retailers?

DP: Yes, but we (focus) on specialty boutiques nowadays. We used to do all of the major brands like Saks and Nordstrom, but we don’t do the department stores anymore —mainly because I don’t want to get into large volumes. I usually do a maximum of 50 ties (per design) because I want to keep the ties exclusive.

3. DDN: When will you release your next collection?

DP: It’s on its way. We’re trying to get it done for November. It’s going to be a mix of graphics over my fine art. I’m trying to incorporate the two of them into the same package. I did that about a year ago and the response was fabulous. So we’re going to try one more time and if it’s again successful, then I think we have something here.

DP: I think the biggest thing has really been my explosion in the world of fine art. I’m selling art literally in the millions (of dollars) all over the world. They start in the thousands for small pieces to the hundreds of thousands. I have a huge piece that’s about 40 feet that’s hangs in the Florida Marlin’s baseball stadium down in Miami. It’s just all happened so fast.

5. DDN: You’ve said before you don’t like to be identified by one specific medium, such as a sculptor or painter. Why is that?

DP: I don’t want to be put into a position or boxed into a corner where I have to paint landscapes for the rest of my life. I see these great artists who spend 40 or 50 years painting the doggone same thing. That’s (like the) punishment you had in school, where you had to go up to the board and write the same sentence 100 or 500 times. I look at it just like how I want my life to be. As much as I enjoy having a good steak or a good fish, I don’t want to eat that same thing every day or at every meal.

There was a Greek philosopher who stated that no man jumps in the same river twice. That’s exactly how I see my life, my paintings, my designs, and even my neckties. The 50 ties I create, if they’re sold in less than three days, I don’t want to make that same one again. I want that variety. I want to create the next collection.