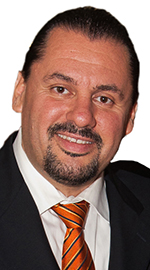 1. DDN: What do you attribute to the longevity of Roman Village?

AR: Fifty years is a milestone for anybody in business, especially for a family restaurant considering the average franchise restaurant expectancy is 15 years.

I believe it’s in our heritage. Being Italian, we have a great sense of pride serving great food with friendly service.

Dad chose this location back in 1964; then it was a mecca for Italians. Many Italian Americans came to this area to work at Ford Motor Co. We could have done like others. Instead of renovating Roman Village back in the 1980s, we could have opened a new location and closed that one. But instead, we invested the money in Dearborn’s south end, because it’s a great neighborhood. We’ve had the same families that have been patronizing the business there for 50 years. We’ve invested a lifetime in this place, so it’s never been an option to pack up and leave. (One of the reasons people keep coming back) is that when they come in, they see that the place is kept up. They see that we’re always on the cutting edge of things. I don’t mean cutting edge in the sense that we’re trying to create these elegant dishes that are overpriced. I just mean quality, real authentic Italian food, made fresh.

The other nice thing is that city of Dearborn keeps up all of Dearborn, not just the downtown. So the area we’re in just underwent a facelift, where the city just redid the streets, the sidewalks, the streetlights, the signage, everything. They did a nice job.

2. DDN: What projects are you working on?

AR: We acquired a site on Plymouth Road, just west of Merriman, in Livonia last year. It used to be known as DePalma’s before it became Giulio’s Italian Restaurant. There’s still a lot of work we need to do before we open it. I’m not looking just to put on a new coat of paint and open the doors — we’re doing a complete renovation in there. I’m going to set it up so that it matches the theme and style of (our other restaurants), most likely like the Canton or Farmington Hills stores since they’re our newer establishments. We want our guests to recognize and feel that they’re in one of the Rugiero establishments. Instead of Cucina Italiano, we’re going to call it Antonio’s Piccolo Restaurant because it’s a slightly smaller operation (4,000 square feet). So because it’s a little smaller, we’re probably going to scale down the menu a little bit. We’re hopeful that by the end of 2014 we’ll be up and running.

3. DDN: How do you approach making additions or changes to your restaurants?

AR: We’re always in touch with what’s going on in the restaurant industry. So when we open a new restaurant, we might make some changes, and then go back to Roman Village and make those adjustments there. You want to make sure that everybody is on the same page, because you want your guests to find consistency wherever they go.

When we opened our most recent location in Canton — that’s the largest location (10,000 square feet) — we did little things, like adding gelato. Now that’s something that I couldn’t go back to the other stores and update because you need the machinery and the square footage for that. Gelato is a process, and you need the true machines that can make the gelato. We imported a Carpigiani machine from Italy. We also get the product from Italy, and we’re making it with the specs and recipes just as they do back home. Because of the sheer size, we’re unable to go to the other locations and incorporate the gelato, but customers love to see those changes in the upkeep.

4. DDN: How has business transformed over the years?

AR: Being in business for 50 years, you see a lot of changes — not just inside the business. You see changes with people, with how the restaurant business is developed. Roman Village has been remodeled several times. Looking back, the last eight to 10 years have been the best business we’ve ever had. Part of that is because people like that it’s a family operation. And we always hear (customers) saying they like to go back to the old neighborhood. They may have moved away, but they grew up eating this food. It’s like when you move out of your mom’s house, when you go home and eat, you realize how much you miss the food.

5. DDN: In what ways has your restaurants stayed the same?

AR: No matter how much work we do, how much we try to fix it up and make changes, there’s always that sense that it feels like my father is still there. We still have a family table in the dining room, which is where my father would always sit — he would have his coffee, keep an eye on the dining room, and talk with the people. I still see him sitting there. He passed away in 2008, and we have a nice tribute wall in the building for him. It has the restaurant’s original contract, which was done on a placemat, framed next to his picture. When he took over the restaurant 50 years ago, the gentleman who owned it at the time was having problems with his partner. The owner said to my father “You want the place, Tony? You can have it. I’m done here.” His uncle loaned him the money, and with a handshake, they brought out a placemat (to sign), and it was done. No lawyers, no closing company, nothing. It was all done on a handshake and respect and honestly.

So when customers walk in, that sense of my father, the way he did business, carries on — the way we treat our customers, the way we treat our employees. We’ve got employees that have been with the company for 46 years. My mother, who’s been part of the business from the beginning, everyone knows her as “Mama Rita.” She still works in the restaurants, going store to store, overseeing the food preparations. Her favorite part of the day is when she is in the dining room talking to her customers.