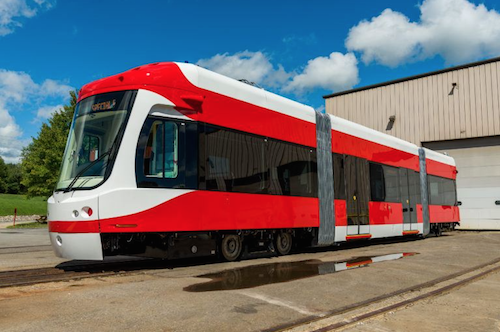 Nearly two months ahead of initial projections, the first QLine streetcar will arrive in Detroit on Wednesday, M-1 Rail announced today. The delivery of the streetcar keeps the QLine — a 6.6-mile circulating streetcar system along Woodward Avenue — on schedule for passenger operations to begin in spring 2017.

“Receiving the first QLine streetcar at this time will provide M-1 Rail a greater opportunity to help Detroiters acclimate to the idea of sharing the road with a streetcar, and give us additional time for driver training,” says Paul Childs, COO of M-1 Rail. “Over the next few weeks, we’ll complete the final assembly and mechanical checks needed before the streetcar makes its first appearance on Woodward Avenue.”

The vehicle will depart today from Pennsylvania-based Brookville Equipment Corp., the only streetcar designer and manufacturer exclusively in the United States.

The three-piece QLine streetcars, which will travel with traffic on Woodward Avenue at speeds up to 35 mph, are each 66 feet long and will carry an average of 125 passengers per car. The streetcars will also feature Wi-Fi access, vertical bicycle racks, and an HVAC unit (heating, ventilation, air-conditioning).

M-1 RAIL, a nonprofit organization formed in 2007 to lead the operation of the QLine, recently began the first of nearly 1,000 tests to be conducted before the start of passenger operations. The service along Woodward will span from roughly Jefferson Avenue in downtown Detroit to W. Grand Blvd. in New Center.