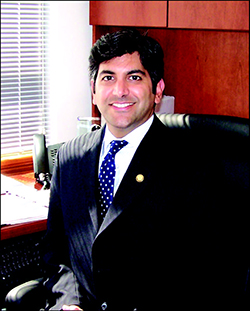 Aneesh Chopra, the first-ever federal chief technology officer, will share expert insight on how to leverage new advancements in technology at the University of Michigan in Ann Arbor on Friday.

“His leadership is not only driving solutions to national challenges in education, energy, and health care, but also inspiring students, concerned citizens, and fellow entrepreneurs to become change agents,” says Sridhar Kota, a professor of engineering at the University of Michigan who worked for Chopra during his tenure at the White House from 2009 to 2012.

Chopra was appointed by President Obama to develop technology practices to encourage government-wide coordination. He helped design the president’s National Wireless Initiative, which included the development of a nationwide public safety broadband network, and led the implementation of President Obama’s open government strategy, which made government information more readily available to the public.

Chopra resigned in 2012 and then co-founded Hunch Analytics, a “hatchery” that births companies to help health care and education providers mine open data.

Chopra will discuss his new book, Innovative State: How New Technologies Can Transform Government, in the Stamps Auditorium in Ann Arbor. The event is open to the public, although an RSVP is required. There will also be a live webcast.