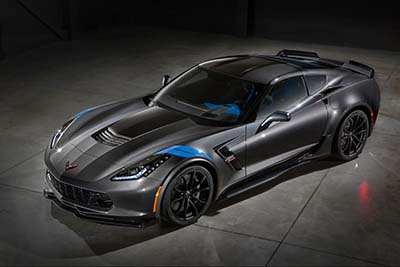 The first off the assembly line 2017 Corvette Grand Sport Collector Edition will be auctioned Friday to benefit the Barbara Ann Karmanos Cancer Institute in the Detroit Medical Center. The money raised will support the institute’s 34th Annual Dinner, to be held April 16 at the Michigan Motion Picture Studios in Pontiac.

The Corvette Grand Sport Collector Edition is a beefed up version of the Corvette Stingray, with some performance parts from the Z06. The 2017 version was inspired by the 1963 Grand Sport, which was designed to take on the world’s best sports cars. Only five vehicles were built before a corporate decision suspending investments in direct motorsports ended the initial project.

The new Grand Sport Collector Edition offers a metallic gray exterior with blue graphics, black full-length stripes, black wheels, and a blue leather and suede-wrapped interior. The 2017 Grand Sport has a 6.2-liter V8 engine producing 460 horsepower and 465 pounds per feet of torque. Pricing details have not been released.

Last year, the auction raised $200,000 by auctioning the first Cadillac CT6 luxury sedan at Barrett-Jackson in Palm Beach, Fla. The upcoming auction will also be held at Barrett-Jackson, and online bids will be accepted.

This year’s Annual Dinner chairs are Paula and Steve Kiefer, vice president of global purchasing and supply chain at General Motors. This year’s dinner marks the sixth consecutive year GM has been a major sponsor for the fundraiser.

“GM is proud to help drive Karmanos’ innovative cancer research as it develops the next standard of cancer treatments to help those here in metro Detroit and across the globe,” says Steve Kiefer.

The Karmanos Cancer Institute has nearly 300 faculty members and 1,000 employees. The institute has conducted 800 cancer-specific scientific investigation programs and clinical trials. Earlier this year, the GM Foundation made a $400,000 grant to fund cancer research at Karmanos.