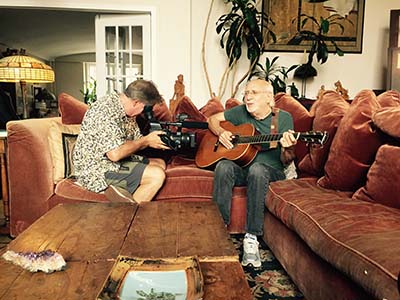 Following his 13-part documentary series on females’ perspectives on aging, filmmaker Keith Famie tackles another personal and difficult subject with a new film on depression and suicide in America, set to be released in April.

Famie, principal of Visionalist Entertainment Productions in Wixom, says Rabbi Daniel Syme of Temple Beth El in Bloomfield Township first approached him to create the documentary because of Syme’s work with youth organizations that help teenagers understand depression, and his family’s personal experiences with suicide.

“I was a little apprehensive at first because I was trying to understand what we can do with this film that’s going to have a real, sincere impact,” Famie says. “I wasn’t sure of the path. Once I dove into it, I found a clear path to be able to help individuals.”

He says the film, to be called, Death is Not the Answer, will center on the warning signs of depression and suicide, as well as interview people who have survived suicide attempts. “I want the film to have some ‘aha-moment’ for individuals who maybe have faced depression or who have wrestled with those issues (so they) can be enlightened by something they see or hear from someone else’s story,” Famie says.

The documentary will feature an interview with Peter Yarrow (from the folk group Peter, Paul, and Mary). In a recent taping, Yarrow focuses on his struggles with depression, but also about how he feels music can make people happy. The film will also include interviews with Eric Hipple, a former quarterback for the Detroit Lions who attempted suicide, people who have survived suicides, and first responders, along with various experts on depression.

Famie is well-known for his documentary series, including Embrace of Aging: The Female Perspective of Growing Old and Maire’s Journey, a documentary that tells the story of Maire Kent, who died of sarcoma cancer at age 24 and requested her ashes be sent to sea. A winner of 11 Emmy awards, Famie, who finished third in, Survivor: The Australian Outback, continues to produce films about history (Detroit: Our Greatest Generation), ancestry (Italian, Greek, Polish immigrants, and among other cultures), and documentaries (Ice Warriors).

A chef and former Royal Oak restaurant owner, Famie says the 90-minute documentary will premiere in conjunction with The Silent Epidemic: A Conference on Suicide in Plymouth Township. The film will also air on Detroit Public Television.