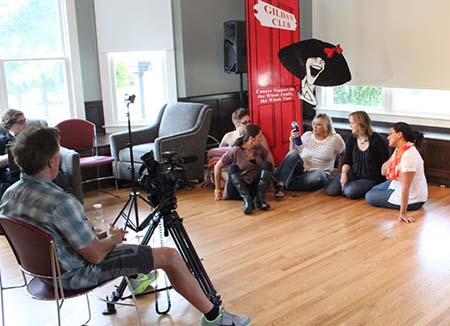 “I am humbled and truly honored that the ladies of Detroit would select me for this award, Faime says. “I was touched, entertained, educated, and inspired a great deal during the producing of the series about how women age. “

The Diamond Award honors an individual or organization for either improving conditions for women in the workplace or providing advancement for women in society.

“Everything we do here and (the projects) I like to take on have an impact on people in some way,” Faime says. “The Embrace of Aging allows individuals to look at their own aging process through the great minds of science and medicine and apply that to their own lives.”

The Embrace of Aging series is a trilogy — the first installment featuring the perspective of men.

“It was always the plan to follow it up with the one on women, and the third one of the trilogy series, The Embrace of Dying: How we Deal With the End of Life, he says.”

The second installment of Embrace of Aging series can be seen on all PBS stations in Michigan starting in April, with the third part of the trilogy coming in the fall.

Visionalist Entertainment Productions, Faime’s company, is currently working on Death is Not the Answer — a film that dives into the complicated issue of depression and mental illness. “If we do the job right, our goal is to change the perception of the word depression as it relates to mental illness, as well as save lives,” Faime says.

The filming process can take up to two years and follows a straight-forward guideline. The 10-time Emmy winner dives into the subject matter, gets himself involved, and asks a lot of questions  — seeing the effects it could have on his own life.

“You keep your eyes and ears open. You just have to pay attention and be very sensitive to what’s happening around you,” he says.

For more information on Faime and is films, visit v-prod.com/â€‹