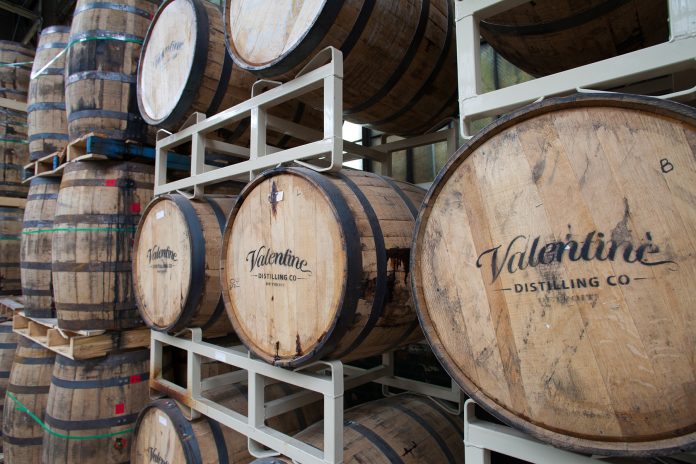 Ferndale-based Valentine Distilling Co. today announced it will invest $1 million to expand its operations, including the acquisition of a custom-made, 1,500-gallon still imported from the Italian distillation company, Frilli. The new still will have the capacity to produce 1,000 barrels of whiskey a year.

“We wanted to build the best still to maintain the quality of our products,” says Rifino Valentine, founder and owner of Valentine Distilling. “Frilli has been building distillation equipment since 1912 and has a phenomenal track record and experience in triple pot distillation, and that’s just what we need to keep up with the demand of Valentine spirits.”

Valentine’s new still is the first that Frilli has ever shipped to the United States.

“We are honored to build this still for Valentine. We are excited to ship to the U.S. for the first time,” says Simone Martini, a Frilli representative. “The creation of this still will allow Valentine to continue to produce even more of their exceptional products.”

The whisky that will be distilled in the new still will be ready for bottling in 2023.

In 2016, Valentine Distilling relocated and expanded its Cocktail Lounge location in Ferndale to a 15,000-square foot warehouse down the street from the Lounge. The warehouse includes copper stills and whiskey barrels.

Since beginning the custom still build with Frilli, Valentine is adding 5,000 square feet of space for a rick house to store the aging barrels once the product leaves the still.

Valentine Vodka was named “World’s Best” by The World Vodka Awards in London in 2016 and 2017. Also, in 2017, the company’s 10-year Mayor Pingree Blue and Black label bourbons received the Double Gold awards at the San Francisco World Spirits Completion. Double Gold is the highest honor in the contest.