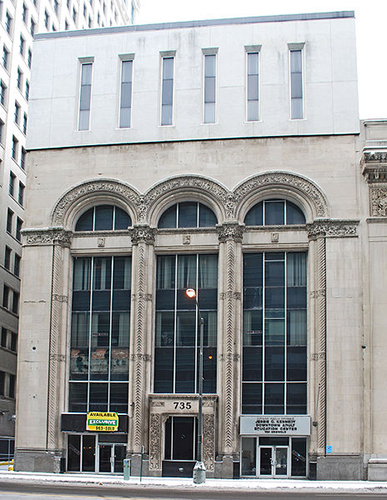 The Ferlito Group has opened the first of three Anytime Fitness locations in the city in the former Security Trust building at 735 Griswold in downtown Detroit.

“We bought the entire Detroit territory for Anytime Fitness,” says Dakota Shayne, the gym’s general manager. “Our plan is to open three clubs in the next three years. Midtown will be the second location, and for the third one, we’re just trying to see how the city grows — we’ll go where the people go.”

The facility features the building’s original staircase, which takes members from the first floor of strength equipment to the second floor mezzanine of cardio machines. As one of the city’s only 24-hour gyms, Anytime is staffed from 10 a.m. to 6 p.m. with yoga, spinning, and indoor rowing offerings.

While renovating the building — designed by Albert Kahn — the builders uncovered large windows that were covered over with concrete blocks along one side of the building. “(Now) when you come into the club, it just exudes health. It’s really open and fresh,” Shane says.

The gym can accommodate up to 1,500 members, but the Ferlito Group is prepared to open its second location once the first facility hits the 500-member mark, Shayne says. Depending on the success of the Griswold gym, Shayne says the business may begin developing the Midtown site as early as this summer.

Ultimately, the 4,800-square-foot gym is a place for people “who are rebuilding the city,” he says.

Membership is $39 a month, with lower pricing available for corporate accounts with 20 or more employees. So far, the company has established relationships with Quicken Loans, Ernst & Young, Campbell Ewald, and Meridian Health Plan, Shayne says. He adds members enjoy reciprocity at any of the franchise’s 2,000+ locations worldwide.