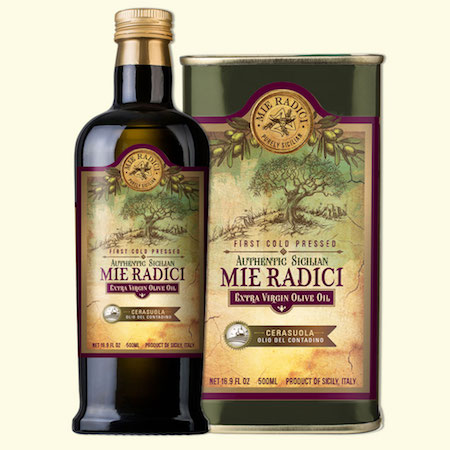 Mie Radici, which translates as “my roots,” recently had its products featured during Food Network’s Iron Chef Showdown: Autumn Bounty Battle, which aired live from New York City. Not long after Hayley began promoting Mie Radici’s olive oil on social media, she was contacted by Chef Jonathan Scinto of Iron Chef about using the products during the show.

“It was such a surprise, but I know about the caliber of olive oils out there,” says Vincent. “My family in Sicily had been encouraging me for years to import Authentic Sicilian Olive Oil, so, I thought there might be room in the market for a product that was real. We just wanted to be a company that offered an authentic olive oil that people could enjoy with confidence. Then we began extending that confidence with other products such as Artisan olive oil soaps, Oak Barrel-aged Balsamic Vinegar from Fondo Montebello, and Kimbo Coffees from Naples, Italy.”

Mie Radici olive oil is pure Sicilian, harvested in Agrigento, a region in Euope known for growing oranges, lemons, and apricots, making the soils prime for olive oils. The company’s olive oil has a distinct taste, described as “buttery with a faint, peppery finish.” It is first cold-pressed and bottled within 12-hours of harvest and utilizes two kinds of olives, the Cerasuola and the Nocellara, which aren’t typically shipped to the U.S.

Mie Radici’s store is located at 37700 Six Mile Rd in Livonia and the grand opening celebration begins at noon. More product information can be found here.