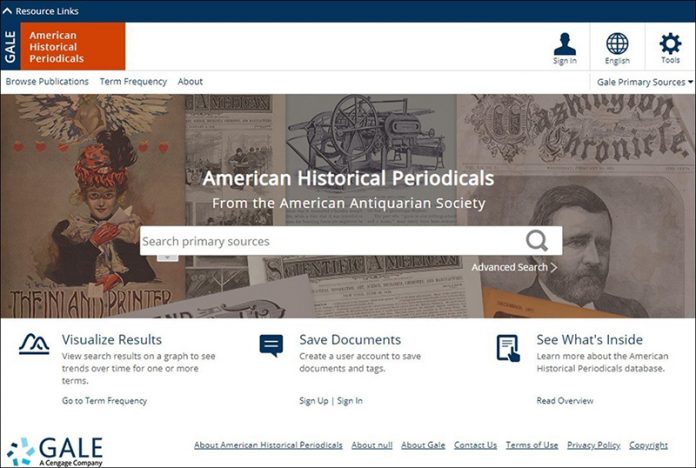 The American Antiquarian Society in Massachusetts has partnered with Gale, a Cengage company, in Farmington Hills to make its collection of Americana from the Colonial period through the 20th century more accessible to researchers.

“Over the years, we have been impressed by Gale’s leadership in the library market, the strength of their editorial process, and their innovative approach to the development of digital technology tools,” says Ellen S. Dunlap, president of the American Antiquarian Society. “American Historical Periodicals is an important project for the American Antiquarian Society, representing decades of collecting, cataloging, conserving, and digitizing, and we are pleased to have a solid partner in Gale to help us take it to the next generation of researchers.”

Gale is offering free access to more than 6 million pages of American periodicals in Series 1-5 to any U.S. or Canadian institution that owns a Gale Primary Sources archive.

“American Historical Periodicals represents one of the most comprehensive libraries of American periodicals in the world,” says Seth Cayley, vice president of Gale Primary Sources. “Through our partnership with the American Antiquarian Society, Gale provides a unique documentary history of the American people and nation from the Colonial Era through to the Civil War, Reconstruction and the early 20th century.”

The new series is currently available.