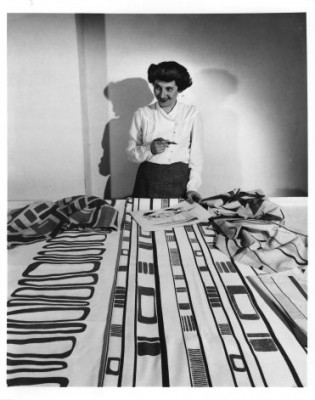 An exhibit of more than 60 textiles designed by Ruth Adler Schnee, a celebrated Detroit textile designer and architect, will be featured at The Carr Center in downtown Detroit Wednesday through October.

“Ruth Adler Schnee has been a pioneer not only in defining the modern look of architectural interiors, but also in redefining postwar America’s sense of public space,” says Rip Rapson, president and CEO of the Kresge Foundation, a Troy-based nonprofit who selected Schnee as the 2015 Kresge Eminent Artist and has partnered with The Carr Center to host the exhibit. “Her work and her influence also reach intimately into homes here in southeast Michigan and across the country, where she may not be a widely recognized name, but has brought the crisp look and feel of the modern design era.”

The exhibit will feature more than 200 works including posters and advertisements designed by Schnee in the 1960s for her home goods stores Adler/Schnee and 30 photographs of architectural and interior planning projects done in collaboration with Frank Lloyd Wright and Minoru Yamasaki, along with the fabric panels such as her newest creations for Knoll and Anzea, a upholstery and drapery fabric manufacturer.

The exhibit also features keys to the city of Detroit that were awarded in 1976 to Schnee and her husband for her architectural contributions to the design aesthetic of the original Greektown District.

Schnee, 95, escaped Nazi Germany as a child along with her brother and parents. Schnee studied art at Cass Technical High School and completed a fellowship at the Cranbrook Academy of Art in Bloomfield Hills. She helped design the General Motors Technical Center in Warren, the World Trade Center, and helped to update Albert Kahn’s Ford Rotunda in Dearborn. Schnee now resides in Southfield.