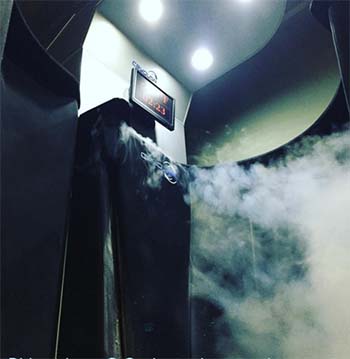 Cryospa Detroit, a Bloomfield Township-based company that offers a type of therapy treatment using extremely cold temperatures, called cryotherapy, will expand with the addition of new centers in downtown Detroit and Royal Oak.

“People have used cold treatments for thousands of years,” says Zach Goetz, managing partner of Cryospa Detroit, located within Bloomfield Hills Tennis and Fitness, and former trainer at D1 Sports Training in Bloomfield Township. “Cryotherapy is an extension of that.”

Cryotherapy offers an alternative to ice baths many professional athletes favor after games and workouts. Customers step inside open chambers filled with super-cooled air, exposing their skin to temperatures around -238 to -274 degrees (Fahrenheit) for about three minutes.

Goetz says cryotherapy exposure forces the body to divert blood flow from the skin to the body’s core. He says this “recycles and enriches (the) blood” and provides long-term health effects.

He says the sudden exposure to cold pushes the body’s metabolism into overdrive, causing the customer to burn up to 800 additional calories in the hours following treatment.

Cryotherapy is not regulated by the Food and Drug Administration.

Goetz said the 1,600-square-foot Royal Oak center, to be located at 32824 Woodward Ave. next to Yuzu Sushi Co., will serve as the flagship location offer two to three cryotherapy chambers, while the Bloomfield Township and Detroit locations each have one chamber. The Royal Oak center will open within the next month.

The Detroit location, to be located within the fitness center of the Compuware Building, is expected to open by April.