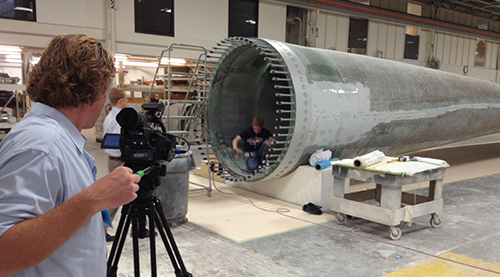 After three years of filming and editing, Exported From Michigan — a documentary that chronicles the recovery of the state and the city of Detroit through art, alternative energy, entrepreneurs, education, innovation, and the craft beer industry — is set to premiere on June 12 in Grand Rapids. The film will likely be shown in metro Detroit over the summer and into the fall.

“I interviewed close to 150 people, and about 45 to 50 people ended up in the film,” says Jon Vander Pol, the film’s writer, producer, and director, who estimates his team whittled down more than 100 hours of footage to 90 minutes. “There are a lot of great stories in this state.”

A common thread of sustainable energy, transportation, and agricultural systems can be found throughout the film, Vander Pol says. The main narrative follows the University of Michigan Solar Car Team at the World Solar Challenge, an 1,800-mile race across Australia. The film also focuses on innovative businesses and organizations.

“We really keyed in on the craft beer movement going on in Michigan,” Vander Pol says. “There’s Founders Brewery (Grand Rapids), which is in 32 states now, so they’re quite large. Brewery Vivant (Grand Rapids) is the first LEED certified brewery in the nation, and Corner Brewery in Ypsilanti has a half-million-dollar solar installation on its roof.”

The film’s crew also made stops at Spirit of Hope and Earthworks, two urban farms based in Detroit, as well at Ford Motor and General Motors for a look at their hybrid and electric vehicles.

“Another place we went to is Energetx in Holland, which made boats, but with the recession and whatnot, reexamined their core competencies,” Vander Pol says. “Since they knew how to make large fiberglass hull structures, they retooled their plant, and now they’re making wind turbines. This is all about businesses focused on innovation.”

There will be limited screenings of the film throughout the state this summer, starting with showings on June 12 and June 16 at the Wealthy Theatre in Grand Rapids. Both showings will start at 7 p.m. and will be followed by a Q&A session with Vander Pol and others involved with the film. For more information, or to purchase tickets, which are $10, visit grcmc.org.

Looking forward, the Exported From Michigan team is actively submitting the documentary to film festivals nationwide. “We’re just shining a light on the people who are doing all of the work (to improve Michigan) — not just in Grand Rapids and Detroit, but in Traverse City, the Upper Peninsula, all over. I want people to be inspired,” Vander Pol says.