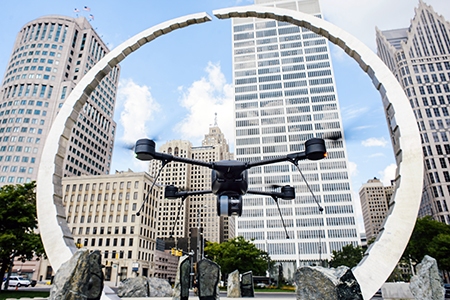 Fred P. Hochberg, the chairman and president of the Export-Import Bank of the United States, will visit Detroit on Thursday to discuss the importance of the region’s exports, and what the agency can do to help companies grow their international lines of business.

“The point of this trip is to make sure Detroit companies know we’re around,” says Matt Bevens, a spokesman for the independent federal agency, based in Washington, D.C., which offers a variety of financing methods that promote the sale of U.S. goods and services abroad. “A company might get turned down by a bank or a private insurer, and they don’t know that Ex-Im Bank is even an option for them.”

Hochberg will visit the Detroit Creative Corridor Center at the A. Alfred Taubman Center for Design Education in New Center, followed by a tour of Detroit Aircraft Corp., an innovative company that designs, manufacturers, and distributes a variety of unmanned aerial systems and components.

Established in 1934, the bank provides working capital guarantees, export credit insurance, and buyer financing. “We’re trying to level the playing field so that companies in the United States, and in Michigan, aren’t losing sales because their (global) competitors are coming to the table with better financing (support),” says Beven, noting that 95 percent of the world’s consumers live outside of U.S. borders.

To promote Export-Import Bank products, Hochberg will meet with local businesses during a roundtable discussion at the Detroit Creative Corridor Center. A member of Ghafari Associates, an architecture and engineering firm in Dearborn, will be on hand to discuss how they have used the bank’s working capital guarantee to support their exports.

U.S. Rep. Brenda Lawrence, D-Southfield, will join Hochberg for a tour of Detroit Aircraft, originally incorporated in 1922 as the Aircraft Development Corp. and at one time the largest aviation holding company in the world before it closed in 1933 due to the Great Depression. The company was reformed in July 2011.

“Detroit Aircraft is a really innovative manufacturer that’s already exporting (its unmanned aerial systems), and could be growing those overseas sales even more with the help of Ex-Im Bank,” Beven says.

“We are a small business that has tremendous opportunities for international growth, and we are very appreciative to host Chairman Hochberg and his team, along with Rep. Lawrence,” says Jon Rimanelli, chairman and CEO of Detroit Aircraft, which is a contract manufacturer and distributor of the Lockheed Martin Indago VTOL Quad Rotor, along with other unmanned aerial systems. “We also want to thank Mayor Mike Duggan and his economic development team for making the visit possible.”