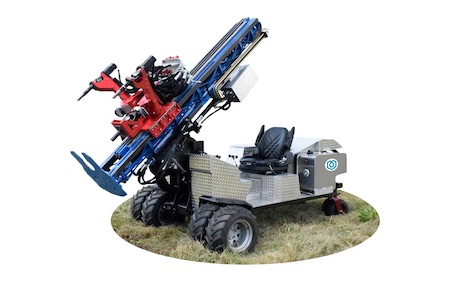 “The launch of Hazl will not only accelerate the development of our various environmental technologies, but also greatly benefit other applications such as geothermal, geotechnical, and water well drilling,” says Andrew Niemczyk, Hazl’s creator and Exlterra’s founder. “There is nothing in the world like this machine, I guarantee you that.”

Hazl is powered by an energy-efficient, 26-horsepower Kohler engine, complemented by a proprietary hydraulic system, making it operable in any environment. The rig is built for performance, combining mobility and economy without sacrificing power or efficiency.

Hazl was tested for two years in various locations across the U.S. and Switzerland, with operators at various levels of drilling experience.

“During the development of the drill rig we had the opportunity to interact with many companies around the world and people in Hazel Park. We continuously received strong support from city officials,” says Frank Muller, Exlterra’s CEO. “When determining a name that fit our drilling rig, it just felt right that it be named after the city where it was born.”

Money Matters – Get Out There and Pitch’: How Alerje Leveraged Its Way to...