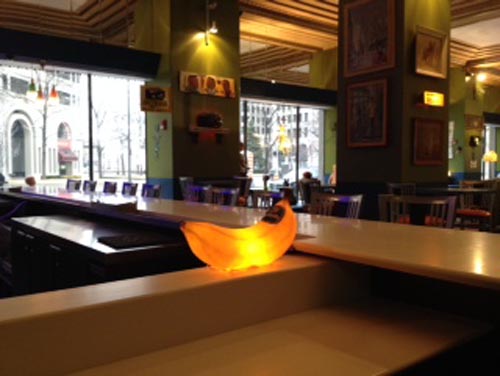 After watching artists and musicians move from the East Coast to Detroit to take part in the city’s turnaround, restaurateurs Robert and Melissa Jasper sold their two eateries in Massachusetts and New Hampshire and headed to the Motor City. Their new restaurant, The Zenith, opens today on the first level of Detroit’s Fisher Building.

The cuisine, a fusion of southern and Mexican cuisine, includes everything from grilled cornbread to fried catfish to four-pepper gravy to honey-chipotle sweet potatoes. Starting next week, the 225-seat eatery, at the corner of Second Avenue and West Grand Boulevard, will be open for lunch and dinner Monday through Friday. In the coming weeks, the restaurant will offer brunch and dinner on the weekends.

“The food is south of the border meets the Mason-Dixon line,” says Melissa Jasper, who for the last 20 years operated two Friendly Toast restaurants — in Cambridge near the Massachusetts Institute of Technology and Portsmouth, New Hampshire. “It was a crazy, successful diner and we had a six-page menu and a four-page drink menu,” she says.

The 16,000-square-foot space that originally housed a bank when the Fisher Building opened in 1928 includes a large safe in the lower level along with a 49-seat banquet room. The safe could be converted into a vintage clothing store, while the banquet space is available to rent for private events.

“After we get each dish perfected, we will add more and more items to the menu,” Jasper says. “We should have our liquor license (by May 1), and we’ll bring on a drink menu that complements an extensive Tiki bar and lounge we’ve created. Our former drink menu was based off of Alfred Hitchcock films.”

The décor, a collection of art from the 1940s and 1950s, includes a print of the Lone Ranger riding his horse, Silver, along with various post-war beer displays, colorful jungle animals, mannequins, decorative lamps, and dozens of other pieces. In addition, the first level space includes a private room for 12 that is adorned with paint-by-number paintings.

With few options for food and drinks in the New Center area (Northern Lights Lounge is located nearby), the Jaspers plan to capture audiences from the Fisher Theatre as well as a growing residential base in Midtown, Corktown, downtown Detroit, and Lafayette Park. “When we first visited Detroit two-and-a-half years ago, we couldn’t believe how nice everyone was and the amazing architecture,” Jasper says. “Zenith means progress, and that’s what Detroit is all about.”