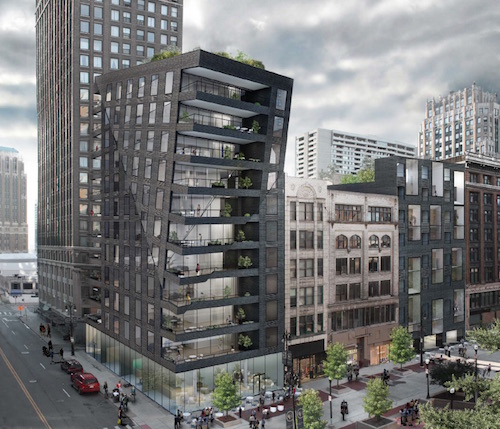 For the first time in decades, Detroit’s Capitol Park district behind the Westin Book Cadillac Hotel will see the addition of new buildings. Over the last three years, the district, built around a triangular park that replaced the first state capitol from 1837, has been undergoing a complete renovation.

Capitol Park Partnership in Detroit, which last year completed a renovation of the Detroit Savings Bank building in the district into 56 loft apartments and office space, and is currently renovating two other historic structures — Capitol Park Lofts and the Farwell Building — plans to replace a former restaurant it owns in the district with a mid-rise residential apartment building along with ground-floor commercial space.

“Over the last decade, the east side of downtown has largely been transformed, while the west side took a bit longer,” says Richard Karp, a partner of Capitol Park Partnership with Richard Hosey and Kevin Prater. “With the demand we are seeing for new and renovated residential apartments, office space, and retail and restaurant locations, the timing is right to start the process of building new structures.”

From a rendering provided by the partnership, the former Theodore’s Family Dining eatery at 1201 Griswold (northwest corner of Griswold and State streets) would be replaced with an 11-story brick-and-glass structure that appears to hover over the park. The iconic design contrasts well with Detroit’s collection of pre-World War II historic structures.

The building planned south of the Farwell Building would be eight stories high, matching the height of its northern neighbor. The Farwell, vacant since 1973, is being renovated into 82 residential apartments, offices spaces, retail and restaurant areas, and a rooftop deck. It is expected to open in fall 2017.

Zago Architecture Inc. in Los Angeles designed the buildings for Capital Park Partnership. The firm has been active in Detroit in recent years with the design of the Museum of Contemporary Art Detroit (MOCAD) in Midtown, Mercury Coffee Bar in Corktown, and the Greening of Detroit Pavilion in Lafayette Park.

In turn, Capitol Park Lofts at the southwest corner of Griswold and State streets will open in November with 63 apartments and 17,000 square feet of commercial space. It joins the redevelopment of other buildings in the district by Bedrock Real Estate Services, Broder and Sachse, and Lear Corp.

In addition, Detroit-based Roxbury Group is building 80 residential apartments a block south of Capitol Park atop a 10-story parking deck. The deck, which offers ground-floor commercial space, is located immediately east of the Westin Book Cadillac Hotel. Called The Griswold, the development at 150 Michigan Ave. is expected to open by the end of the year.

Editor’s note: Historically, Griswold, State, and Shelby streets bordered Capitol Park. However, the U.S. Post Office identifies Shelby Street, which runs along the west side of the park, as Griswold Street.