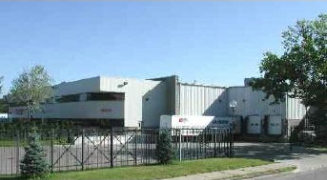 Scheduled to open this summer, the innovation institute will pair advanced university researchers with companies that can translate leading edge material concepts into new products in aerospace, medical devices, robots, automobiles, and consumer goods. The project will be located inside a vacant industrial building at Rosa Parks and Porter that spans nearly 100,000 square feet of space. The building sits on a 4.2-acre site.

The industrial facility is located across Rosa Parks from the upcoming Quicken Loans Technology Center, a 66,000-square-foot data facility that was announced Tuesday. The technology center, slated for completion early next year, will offer 1.4 megawatts of redundant available power, energy efficient components, and a “next generation” air conditioning system to cool the server rooms.

“Those two projects will be the single largest job providers since Tiger Stadium (was closed in 1999),” says Frank Venegas, chairman and CEO of Ideal Group, a multi-faceted collection of companies headquartered in a former Cadillac plant at Michigan and Clark in southwest Detroit. Founded in 1979, the company today has 450 employees and last year posted revenue of more than $200 million. Ideal Group specializes in construction services, manufacturing, and indirect material management.

“The new innovation center is going to create a lot of jobs, and along with the Quicken Loans Technology Center, joins a lot of new projects going on in Corktown and southwest Detroit,” Venegas adds. “We hope there will be job training and opportunities for residents.”

Over the summer and fall, several new restaurants and bars are coming to Corktown, including Gold Cash Gold at Michigan and Wabash; Social Sushi and an adjoining public space at Michigan and 16th Street near the Michigan Central Depot; Our/Detroit, a 35-seat vodka bar at Bagley and 18th Street; and Rubbed, a 35-seat restaurant on Michigan, between Vermont and Wabash.

The federal innovation institute is backed by $70 million in federal funds and $78 million from various consortium partners that includes $10 million from the Michigan Economic Development Corp. “The long-term goal (of the institute),” explains the White House, “will be to expand the market for and create new consumers of products and systems that utilize new, lightweight, high-performance metals and alloys.”