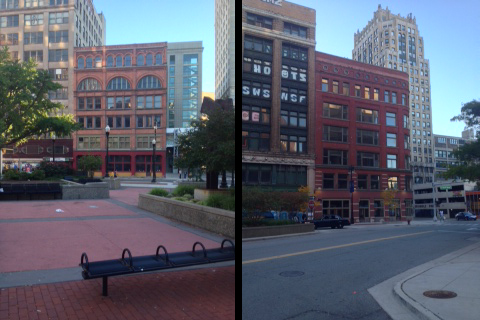 The brick buildings are expected to be renovated into apartments, along with ground floor retail uses. For the Griswold property, a six-story, 36,000-square-foot structure that historically has been called the Bamlet Building, artist lofts are envisioned on the upper floors.

In turn, the six-story, 34,000-square-foot structure on State Street, located behind the Westin Book Cadillac Detroit, will become a mixed-use building.

The acquisitions nearly complete a transition of every structure lining Capitol Park to new owners since 2011. Last month, another Kefallinos building, 37 W. Grand River, was to be sold at auction, but the property was pulled off the bidding list. While not confirmed, Bedrock was seeking to gain control of the five-story, 30,000-square-foot building (H&S Deli operates on the first floor).

Next month, Lansing-based Karp and Associates is expected to start renovation of the first of three buildings in Capitol Park it acquired from Detroit’s Downtown Development Authority and the Michigan Land Bank Fast Track Authority. The first building, 1212 Griswold, also known as the United Way Building, will be renovated into apartments, offices, and retail uses.

Next, Karp will turn to the Farwell Building at1249 Griswold, which also will be renovated into lofts, offices, and commercial uses. The third structure, the Capitol Park Building (1145 Griswold), will trail the Farwell. The renovation of the three buildings is expected to cost $85 million.

“We’ve put a lot of work into acquiring buildings in Capitol Park, renovating the park itself, and now the district is poised for a bright future,” says George W. Jackson Jr., president and CEO of Detroit Economic Growth Corp.

In March, Gilbert released an urban revival plan for downtown Detroit. According to the proposal, “Capitol Park is envisioned to be the center of a new arts district with galleries and cafes on the ground floors and residential apartments above. It will provide a venue for emerging artists to display or perform their work and (will be) a welcome green refuge for residents who live around the park.”

In other development news, the Michigan Land Bank Fast Track Authority approved the sale Wednesday of the former State Fairgrounds at Woodward and Eight Mile for $4.7 million to an investment group that includes Ervin “Magic” Johnson, Marvin Beatty, chief community officer at the Greektown Casino-Hotel, and Lansing developer Joel Ferguson.

Southfield-based Redico isexpected to develop a mixture of residential, retail, medical office, and restaurant uses on the 157-acre site. Green space and a transportation hub will complement the $160-million project. Under terms of the sale, Magic Plus LLC has until Jan. 15, 2015 to complete the transaction.