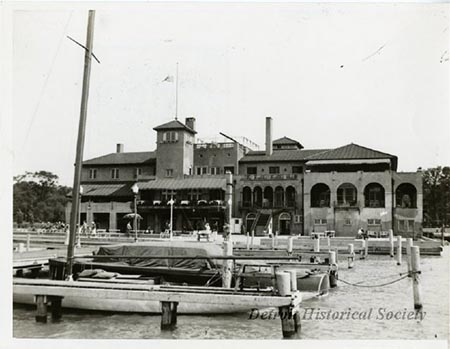 Friends of Detroit Rowing, a nonprofit organization that offers public rowing programs and classes, has signed a 30-year lease with the Michigan Department of Natural Resources to reopen and refurbish the former Detroit Boat Club. In the lease, the facility is cited as the Belle Isle Boat House.

“We have been working diligently with the state of Michigan and the DNR to bring this lease to fruition and open the Belle Isle Boat House to the public,” says Julie Dinan, president of Friends of Detroit Rowing, which has a 13-member board. “The state has been a very dedicated partner in the process, and we look forward to renting the facility for weddings, public events, corporate gatherings, and private parties.”

The goal is to open the facility by the end of the year, though the timing is predicated on raising the funds and completing mechanical and electrical upgrades. “Our organization, through the hard work of so many volunteers, has maintained and enhanced the building and we are working with professional contractors to reopen the facility,” Dinan says. “We’ve already put in more than $300,000 in improvements and maintenance.”

The Detroit Boat Club, which sits on the north side of Belle Isle just east of the MacArthur Bridge, opened in 1902. Over the years, it was one of the most successful boat clubs of its kind in the country. But following a period of tough economic times, the club was closed in 1996. Still, the Friends of Detroit Rowing have offered public classes and programs at the club for years.

“We have many high school students take our rowing classes and then get a full-ride scholarship to a college or university,” Dinan says. “I can’t imagine where those students would be if they hadn’t been offered a four-year scholarship. That is one of the most gratifying activities we do.”

With around 250 members, anyone can join the Friends of Detroit Rowing for a $75 annual fee. The organization celebrated its 175th anniversary last year. “We will be applying for grants, and along with rental fees, we will address the ongoing capital improvements that a historic building like this requires,” Dinan says. “When the board has a plan to offer the building for facility rentals, we will let everyone know.”