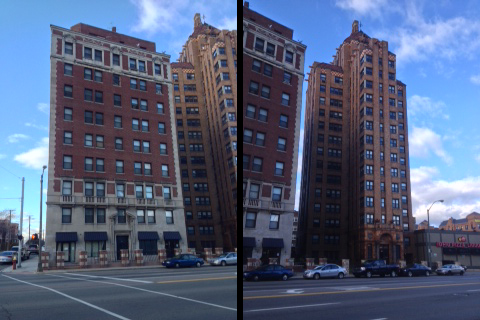 A resurgent Detroit continues to draw outside investors as Triton Investment Co. in Greenwood Village, a suburb of Denver, has acquired four apartment buildings along and near East Jefferson by Belle Isle. In recent years, Triton purchased Alden Towers, 23 homes in East English Village, and an interest in Harbortown, all on the city’s east side.

“We’re very bullish on Detroit,” says Luke Davis, Triton’s director of real estate. “The city has passed the bottom and now we see it going up quite a bit. If you can provide safe, clean, affordable housing, you can fill (apartments) up.”

Last week, Triton acquired the 15-story Kean Apartments, a historic Art Deco structure built in 1931 at East Jefferson, between Hibbard and Holcomb streets. The structure offers 49 units. To the immediate west, the company bought the Hibbard Apartment Building, a 10-story brick and masonry structure built in 1926 that offers 43 units.

In addition, Triton acquired Van Dyke Manor, a six-story structure at East Lafayette and Van Dyke that offers 38 units, as well as the Parker Residences, which offers nine units in Indian Village (Parker and East Lafayette). The Kean is the most prominent of the four structures, offering views of downtown Detroit, Belle Isle, Canada, and Lake St. Clair.

Davis says the four apartment buildings will be updated, including improvements to the exteriors, common areas, and apartments (as needed). Combined, the buildings have a 90 percent occupancy rate, with the apartments ranging in size from 500 square feet to 1,200 square feet.

At Harbortown, a residential, retail, and marina community along East Jefferson, Triton is adding 135 apartments set within five-story structures. At Alden Towers, which offers 381 apartments in four buildings along East Jefferson, the company is more than halfway completed on $5 million in improvements, including all of the common areas, lobby, parking, and riverfront area.