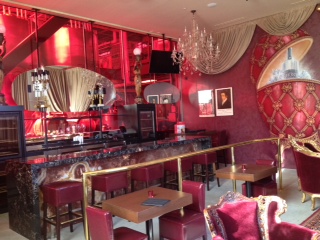 Griffin Claw Brewing Co. in Birmingham’s Rail District is swapping out its planned Russian-inspired vodka bar to meet surging demand for its craft beer. The décor for the Russian Room, with its red velvet accents, will be placed in storage and could emerge at another location in the future.

Once a new concrete floor is added, the space will hold up to nine new brewing tanks, allowing the brewery to nearly double its annual production to 30,000 barrels starting in the fall. Overall, Griffin Claw has 70 employees, and more may be added.

The change follows the success of the taproom’s craft beers, says Scott LePage, spokesman of the 14,000-square-foot brewing and distillery facility that produces 16 types of beers and offers grain and potato vodka, gin, rye, and whiskey. Many of the beers created by Dan Rogers, head brewer and director of brewing operations and his team of four brewers have garnered international awards, including nine gold, six silver, and four bronze medals.

“It’s a shame we have to close (the vodka bar), but we have to continue to serve our customer’s demands,” LePage says. “When we first started (last July), we originally planned to have 75 percent of our beer production in cans and 25 percent in kegs, but we didn’t get our canning line up and running for seven months after the opening so we had to offer more kegs initially. Now we are doing more cans because demand is so great.” 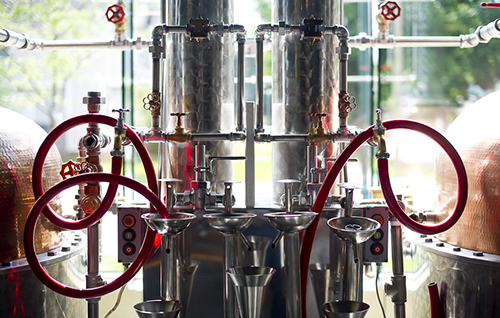 Even after the addition of the new brewing kettles and rectifying tanks, the brand shows no sign of slowing down its expansion efforts. Griffin Claw is owned by Bonnie LePage and Mary Nicholson. Their husbands and families are the same management team behind Big Rock Chophouse and The Reserve, both in Birmingham, East Side Mario’s in Livonia and Rochester Hills, and Clubhouse BFD in Rochester Hills.

Scott LePage says Griffin Claw is exploring the prospect of opening a warehouse to further grow its brewing and distillery operations. In the fall, he says the brewery plans to release its craft vodka for retail sale as well as begin production of its own bourbon.

Since launching last July, the Griffin Claw brand, which includes Norm’s Raggedy Ass IPA and the Screamin’ Pumpkin (a seasonal beer available in late September in glow-in-the-dark cans), has rapidly expanded throughout metro Detroit and throughout the state, with a presence in 1,200 local retailers, bars, and restaurants.

“We could sell all of our beer overseas for more money, but Michigan is our home, and we want to serve the state,” LePage says. “We’re also a little cheaper than our competition, again, because we appreciate our loyal customers. We just want to keep making kick ass beer and hope the beer gods are looking down on us and smiling.”