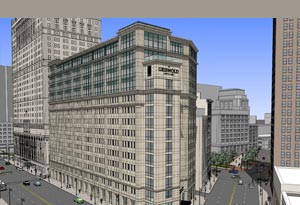 With demand for apartments in downtown Detroit outpacing supply, the Roxbury Group is reviving a plan to add 80 residential units atop a 10-story parking deck located behind the Westin Book Cadillac Detroit. The development company had proposed offering condominiums above the structure in 2007, but had to pull back due to the 2008 global financial crisis.

“We have submitted a proposal and are working with the Detroit Economic Growth Corp. and the Michigan Economic Development Corp., and we are in the preliminary stages,” says David M. DiRita, a Roxbury Group principal. “Where before we sought to do condominiums, we feel the timing is right for apartments. The demand is there.”

Since 2010, more than 15,000 workers have been added to the central business district. New entrants include Quicken Loans Inc. and its affiliates, Blue Cross Blue Shield of Michigan, and added workers at General Motors Co., among others. As a result, the residential occupancy rate downtown has soared above 95 percent.

Brian Holdwick, vice president of the DEGC, confirmed Roxbury had submitted a proposal for adding apartments above the deck, at Michigan and Griswold. The plan includes the construction of a five-level addition with open floor plans and the completion of a dedicated elevator offering access to on-site parking, retail offerings, and the hotel.

Called The Griswold, the project, to be designed by Detroit-based Kraemer Design Group, would take 12 to 18 months to complete, DiRita says. Many of the units would offer excellent views of the Detroit River, Belle Isle, and Canada now that the demolition of the Lafayette Building at Michigan and Shelby has been completed.

The DEGC, which oversaw construction of the 545-space parking deck for the Downtown Development Authority, designed the structure to accommodate five levels of residential or commercial office space. Detroit-based Walbridge built the deck.

In related news, DiRita says the Roxbury Group is on schedule with its redevelopment of the David Whitney Building at Woodward and Park in downtown Detroit. The 19-story structure, designed by David Burnham, is being converted into 108 apartments, a 136-room Aloft Hotel, two restaurants, and retail space. The project is slated to open in fall 2014.

Earlier this year, the Roxbury Group completed The Auburn, a 58-unit loft apartment building along with 9,000 square feet of retail space, at Cass and Canfield in Detroit’s Midtown District. The building is 100-percent occupied. The company also is redeveloping the Globe Building, located east of the Renaissance Center near the riverfront, into a $13-million adventure and discovery center for the Michigan Department of Natural Resources. The project is scheduled to open next year.