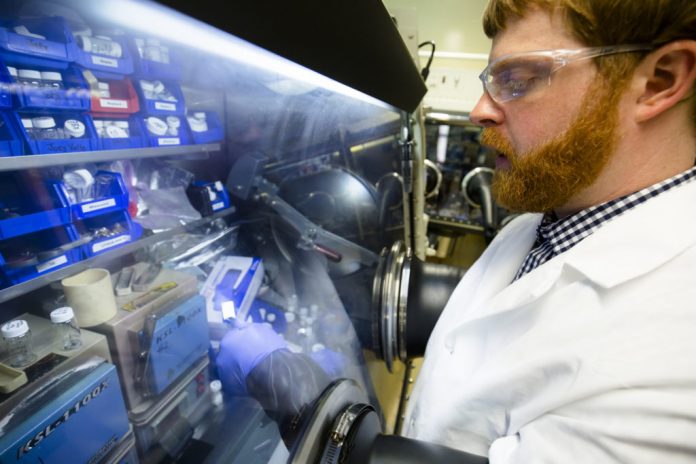 Engineers at Ann Arbor’s University of Michigan have developed a rechargeable battery that could double the output of today’s lithium ion cells, extending electric vehicle ranges and time between cell phone charges without taking up additional space, the school announced Wednesday.

Engineers can harness the power of lithium metal batteries without the historic issues of poor durability and short-circuiting by using a ceramic, solid-state electrolyte.

“This could be a game-changer – a paradigm shift in how a battery operates,” says Jeff Sakamoto, a U-M associate professor of mechanical engineering who is leading the work.

Rechargeable lithium metal batteries that used liquid electrolytes were considered the next big thing in the 1980s and were in early portable phones. However, the lithium atoms that shuttle between the electrodes tended to build tree-like filaments called dendrites on the electrode surfaces, eventually shorting the battery and igniting the flammable electrolyte.

The lithium ion battery was introduced in 1991 and was more stable but less energy-dense. They replaced lithium metal with graphite anodes, which absorb the lithium and prevent dendrites from forming.

However, graphite can hold only one lithium ion for every six carbon atoms, giving it a specific capacity of about 350 milliampere hours per gram (mAh/g).

The lithium metal in a solid-state battery has a specific capacity of 3,800 mAh/g. Current lithium batteries max out with a total energy density around 600 watt-hours per liter (Wh/L) at the cell level. In principal, solid-state batteries can reach 1,200 Wh/L.

To solve lithium metal’s combustion problem, U-M engineers created a ceramic layer that stabilizes the surface by keeping dendrites from forming and preventing fires. The batteries can harness the energy density and high conductivity of lithium metal without the dangers of fires or degradation over time.

“What we’ve come up with is a different approach – physically stabilizing the lithium metal surface with a ceramic,” says Sakamoto. “It’s not combustible. We make it at over 1,800 degrees Fahrenheit in air. And there’s no liquid, which is what typically fuels the battery fires you see. You get rid of that fuel, you get rid of the combustion.”

In earlier solid-state electrolyte tests, lithium metal grew through the ceramic electrolyte at low charging rates, causing a short circuit, much like that in liquid cells. U-M researchers solved this problem with chemical and mechanical treatments that provide a pristine surface for lithium to plate evenly, effectively suppressing the formation of dendrites or filaments. This improves safety and charging rates.

“Up until now, the rates at which you could plate lithium would mean you’d have to charge a lithium metal car battery over 20 to 50 hours (for full power),” says Sakamoto. “With this breakthrough, we demonstrated we can charge the battery in three hours or less. We’re talking a factor of 10 increase in charging speed compared to previous reports for solid-state lithium metal batteries. We’re now on par with lithium ion cells in terms of charging rates, but with additional benefits.”

The charge and recharge process is what leads to the eventual death of a lithium ion battery. However, in testing the ceramic electrolyte, no visible degradation is observed after long-term cycling.

“We did the same test for 22 days,” says Nathan Taylor, a U-M post-doctoral fellow in mechanical engineering. “The battery was just the same at the start as it was at the end. We didn’t see any degradation. We aren’t aware of any other bulk solid-state electrolyte performing this well for this long.”

The findings are published in the Aug. 31 issue of the Journal of Power Sources.

The research is funded by the Advanced Research Project Agency-Energy and the Department of Energy.