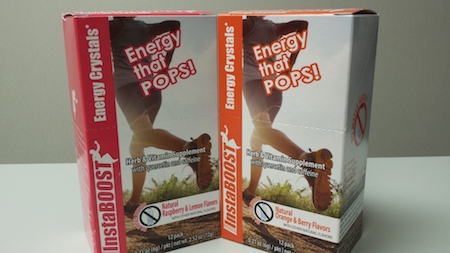 Thanks to a new partnership with Meijer Inc., Southfield-based InstaBoost’s alternative energy supplement, which comes in the form of dissolvable crystals, is now available at more than 200 supercenters in five states.

“This is huge (for InstaBoost),” says Jason Glass, the company’s COO. “It gives us a huge amount of credibility going forward. It’s always difficult for the new guy coming in because you don’t have brand recognition.

“Now that we have the Meijer deal in place, people are more apt to talk to us because we’re involved with such a high-profile retailer. We’ve even been contacted from a few international distributors.”

Instaboost first entered the market in 2012 through Medical Weight Loss Clinic, where it was, and still is, sold as a healthy alternative to traditional energy supplements. A package of crystals contains 15 calories and features Vitamin B12, plant-based quercetin, and caffeine, about the same amount as found in a cup of coffee.

The Pop Rocks-like product has no artificial flavors or sweeteners which can make developing flavors a challenge, says Glass, although he notes that the company has plans to expand the offering beyond the current raspberry-lemon and orange-berry options.

For more information about InstaBoost, priced at $2.95 per packet, visit instaboost.com.