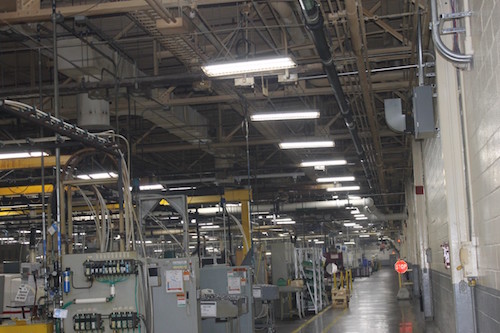 In its drive to meet the electricity needs of its worldwide operations with 100 percent renewable energy by 2050, Detroit-based General Motors Co. today announced it will save $73 million in energy costs this year. The effort includes the installation of 186,000 LED bulbs and fixtures across its production portfolio.

“Energy efficiency can reduce electricity loads, which will help us more easily transition to renewable energy sources,” says Al Hildreth, global energy manager for GM. “Together, these environmental improvements help us reduce our carbon footprint, cut costs, and deliver value back to our customers.”

Improvements to the plants, which both utilize LED lighting, include new doors that isolate airflow in paint shops at the Lansing plant and energy management systems at Fort Wayne Assembly. The Fort Wayne team also installed new variable-frequency drives that help cooling tower pump systems and fans operate with greater precision. The plant will receive nearly $1 million in utility incentives over the next three years as a result.

GM warehouses in Waterford Township and the city of Burton, which have also earned Energy Star Certification, leverage natural light via new skylights, have installed LEDs with motion sensors, and are using energy management systems to control heating.

Bedford Casting Operations, an aluminum die casting facility in Indiana, reduced its energy intensity by 12 percent through the installation of high-efficiency burner controls on its melting furnaces and monitoring the energy use of facility equipment in real time.