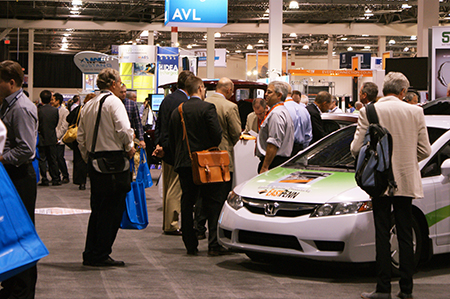 The Battery Show — an annual conference for the advanced battery industry — will nearly double the size of its footprint when it returns to Novi Sept. 16-18, a clear indicator of a thriving industry, say event organizers.

“Since we began the event (in 2010), the industry has really ramped up the volume of batteries that they are producing,” says Steve Bryan, director of the event. “Obviously, electric and hybrid vehicles are becoming increasingly popular. Pretty much every major automaker is at least developing some kind of offering for the industry. So battery companies are actually supplying tens of thousands of units, which a few years ago, they weren’t.”

With projected steady growth — there are double the number of electric vehicles on U.S. roads when compared to the same time last year — the conference has benefited from a buoyant industry, Bryan says.

Reading, Pa.-based EnerSys, for one, is bringing an electric-powered monster truck to the floor, and will host a cocktail reception with International Monster Truck Hall-of-Fame Honoree Jim Kramer on Sept. 16.

For presentations, Bryan expects to see the biggest draw at the plenary keynote session called The Leaders Debate. “It’s a multiple-track conference, but everyone starts in the same session, where we get together all of the leaders from the two respective industries (automotive and battery). The automakers will be discussing their plans and strategies, what they’ll be offering the industry, and also what they need from that sort of supply chain, because that’s a big part of the event.”

Last year, event organizers added the Electric & Hybrid Vehicle Technology Expo to the Battery Show. While the Expo focuses on the engineering of electric and hybrid vehicles, the Battery Show centers on content related to multiple sectors, including portable electronics, medical devices, and energy grids.

“There is a very strong showing from companies involved in utility energy storage, and that’s becoming increasingly important as more and more renewable energy sources are brought online,” Bryan says. “Things like solar power, wind power — these sort of methods of generating power aren’t so much unreliable, but they vary in their output.”

For information about the conferences, or to register for the events, visit thebatteryshow.com.